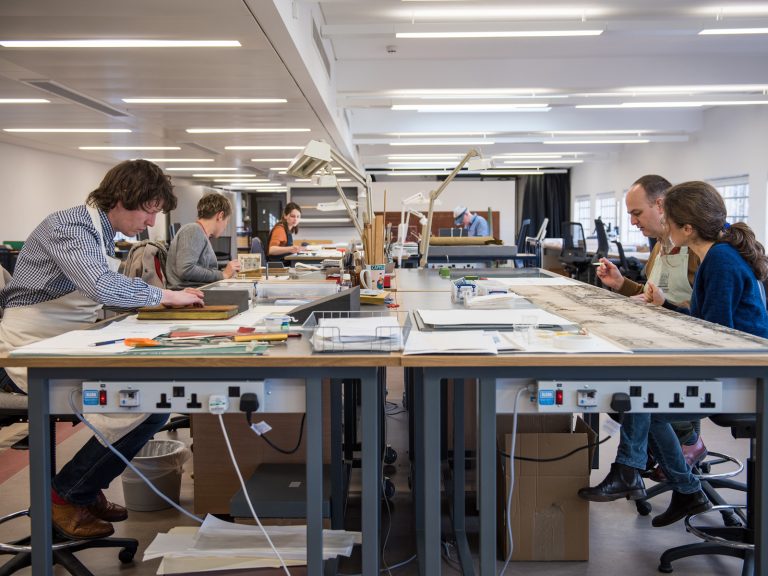 Featured image courtesy of the University of Oxford Development Office

This masterclass focused on the materiality of medieval manuscripts, that is, medieval manuscripts as material objects, and their conservation. It explored how manuscripts were made in the Middle Ages and how modern conservators (for instance in the Bodleian Conservation Studio) conserve and repair them; it also allowed insight into what inferences (e.g. about collation, provenance and patronage) can be drawn from the material aspects of manuscripts. The masterclass was expertly taught by Andrew Honey (Book Conservator) and Johanne Keiding (Book Conservator as well).

The session began with Andrew Honey discussing how parchment is made, tracing the transformation from amorphous, flawed cow- or calf-skin to rectangular, neat folio.
He first explained why the prepared animal skin (pinned to a circular frame) displayed different dermal structures: the belly and chest tend to expand, causing those regions to have a more open structure. He also drew our attention to the fact that the animal skin was still suggestive of the animal, as one could still tell where the front legs, hind legs and neck had been. (Professor Lähnemann gamely went down on all fours to illustrate how a calf or sheep looks). These aspects affect which part of the parchment is considered to be of the highest quality: the part along the spine is usually the preferred part, but such higher quality parchment would naturally also be more expensive. Furthermore, the hair side of parchment tends to require more preparation (wet and dry shaving) to make it suitable for manuscripts than the skin side does, as the hair side is less naturally smooth. At any stage of the process, holes can appear, which will then open out: these holes require stitching but will remain visible. The quality of the parchment, then, depends on the effort and amount of time gone into it; this investment tells us a lot about the manuscript, its provenance, and the individual or community ordering the manuscript.

Andrew was then joined by Johanne Keiding; we were introduced to the intricacies of manuscript conservation and repair. We learned, for instance, that repairs need to be done with parchment from the same kind of animal in order for the parchment to be able to move in the same way. Likewise, seeing the care put into designing the minute pieces of repair parchment was impressive. Like medieval scriptoria, the Studio uses gelatine as an adhesive substance to glue these tiny pieces of repair parchment onto the manuscript. (This modern gelatine is industrially produced, however, and pure gelatine). We were allowed to experience for ourselves how gelatine becomes more adhesive as it is heated to body temperature.

The masterclass ended with several manuscripts from the northern German convent of Medingen being shown, as well as an early printed book from Duke Humfrey’s Library. After we had admired the manuscripts (one of which contained small pieces of cloth protecting the initials) Professor Lähnemann gave a riveting account of the excellent sleuthing done on MS. Don. e. 248, a late-fifteenth-century psalter: she recounted how when it was purchased by the Bodleian, the plaque (presumed to be ivory) attached to it by a nineteenth-century dealer was missing, due to auction house regulations about ivory. This plaque was then located; however, its nineteenth-century floral border was missing, which also had to be found. The plaque was then discovered to have been made of bone rather than ivory; the auction house’s worries were unfounded. Medieval manuscripts, then, are not static; their composition and material characteristics change over time and reflect different conceptions of what constitutes a medieval manuscript.

Greater awareness of the physical realities of manuscripts facilitates describing them and analysing both history and content: knowing why a manuscript looks, feels, and moves the way it does, helps discuss and remember the unique effect of each manuscript as a work of art.

1 thought on “Masterclass on Materiality”