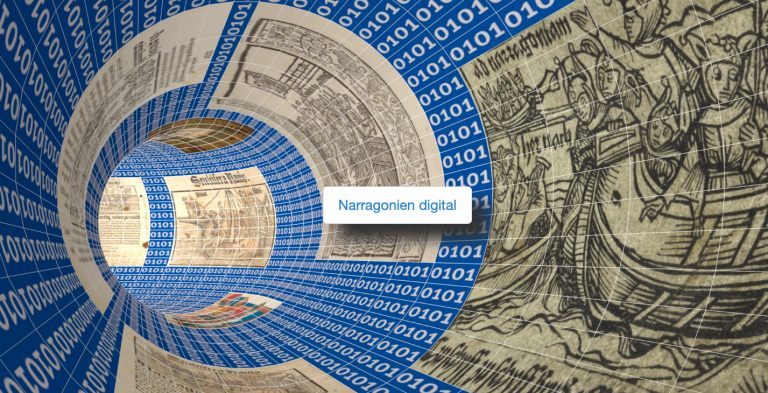 On 10 May this year, the 500th anniversary of Sebastian Brant’s death will be commemorated by launching the final version of Narragonien Digital – the new digital ‘Narrenschiff’ edition created at the University of Würzburg. Joachim Hamm, who has been leading the project together with Brigitte Burrichter, was a guest at the ‘History of the Book’ seminar and presented the edition.

Everyone talks about “zoom fatigue” and the longing for face-to-face conversations, but digital teaching has its advantages. In Hilary 2021, I was working with Henrike Lähnemann at the University of Oxford as an Erasmus intern. Among other things, I attended both the ‘Early Modern German Literature and Culture’ seminar for Undergraduates and the ‘History of the Book Seminar’ for Master students. Both groups were interested in the European publication success of the Ship of Fools and the new digital edition from my “Wahlheimat” Würzburg. That inspired me to propose a joint meeting “in” Oxford and Würzburg. On 3 March, Alexandra Franklin and Alyssa Steiner showed and explained six different ‘Ships of Fools’ from the Bodleian collection while my Würzburg professors Joachim Hamm and Michael Rupp reported on Sebastian Brant and Narragonien Digital. I will briefly summarize here what Joachim Hamm told us about the new edition.

Sebastian Brant’s “Narrenschiff” was a bestseller. Within six years of its first going to press in 1494, 28 editions and adaptations were published throughout Europe. Thirteen copies of seven different versions are in the Bodleian Library (cf. the incunable catalogue Bod-Inc for the versions before 1500).

Of the editions published up to the year 1500, 14 will to be available in the final version of Narragonien Digital, making up a text corpus of about 5,000 printed pages. Not all of these were transcribed manually, a large portion of the text was automatically transcribed using the OCR4all program developed in Würzburg, which now achieves an accuracy of 99.8 per cent for the ‘Ships of Fools’. Apart from the ‘Ships of Fools’, the OCR4all tool is also suitable for recognising text in other early prints and is freely available on GitHub.

Features and functions of the edition

The texts of the Ships of Fools are available both in a diplomatic transcription and as normalised text. There are two different display options. For simply read through a single text, the normalised text of a single Ship of Fools offers the reading experience of a traditional boom. Those who want to place different texts side by side to compare them or want to read in facsimile and transcription at the same time can use the synoptic view.

In addition to the actual display of the texts, the edition provides a great deal of further information. In the index, for example, the many allusions and references in the ‘Ships of Fools’ are listed, with further links and the corresponding references. The option of ‘filtering by layout zones’ also offers a special form of search. Since the ‘Narrenschiff’ editions have a very schematised layout, the different versions can easily be compared. For example, the filtering search function allows placing the woodcuts of the different editions next to each other to see what changes were made by the different editors or printers.

Not only the OCR4all tool, with which the text of early books can be automatically recognised, is freely available. For scholarly purposes, all the texts of the Ships of Fools in the edition can be downloaded as TEI documents under a creative commons licence. This makes the project not only a treasure trove for Brant or ‘Narrenschiff’ scholars but also for all those History of the Book students who want to do their own digital edition.

Agnes Hilger studies German literature, History, and Digital Humanities at the Julius-Maximilians-Universität Würzburg. Agnes worked for the Narragonien Digital project as a student research assistant for one semester where she was the first “test reader” checking the edition for user-friendliness. In Hilary term 2021, Agnes Hilger was an Erasmus intern at the Faculty of Medieval and Modern Languages, University of Oxford.

For more details about the technologies used and about the OCR workflow click here.