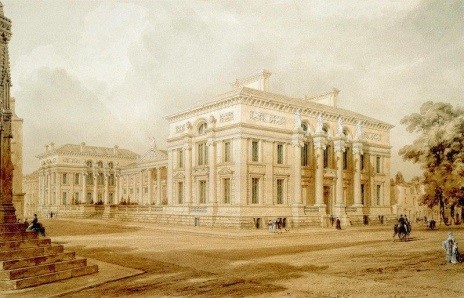 Welcome to the Taylor Institution Library!  The Taylor Institution is the University of Oxford’s library for Modern Foreign Languages.  It was funded by Sir Robert Taylor in a codicil to his will in 1788. Due to his will being contested, the University didn’t have access to the funds until 1834, when it was also considering the creation of a new art gallery – now the Ashmolean Museum. Therefore, as far as the library is concerned, the plans for the library came first, and the Ashmolean Museum is merely an add on…

The building was completed in 1844. You can read more about the history of the library in the History of the Taylor Institution Library and its Collections blog post, or in this article for the Fabian Handbuch, which also has detailed information about the library’s Special Collections.

This video contains an introduction to Special Collections at the Taylorian, including how to access the collections, and how to handle them appropriately.

The collections are strong in works of French literature, history and culture, notably of the 17th and 18th centuries, and there are also a good number of earlier printed books. Noteworthy are:

A small manuscript collection includes items by such writers as Flaubert, Gide, Sartre, Giono, as well as autographs and letters.

The Subject Librarian for German, Emma Huber, gives a short introduction to the German collections in the following video:

Highlights of the German collections include:

Dawkins Collection: The library of the Bywater and Sotheby Professor of Byzantine and Modern Greek, R.M. Dawkins (1871-1955), formerly on deposit with the Taylorian from Exeter College and now held with Special Collections at the Weston Library, includes important pre-1800 and early 20th-century items on modern Greece and Albania. This is a unique collection for the study of Modern Greek dialects.

Morfill Collection: The library of the philologist and literary historian W.R. Morfill (1834-1909), the first Oxford Professor of Russian, formerly on deposit from The Queen’s College at the Taylorian, is now held with Special Collections at the Weston Library.

History of the Taylor Institution Library and its Collections [blog post]

Archives Hub records from the Taylorian

Art UK digitisation of artworks held at the Taylorian