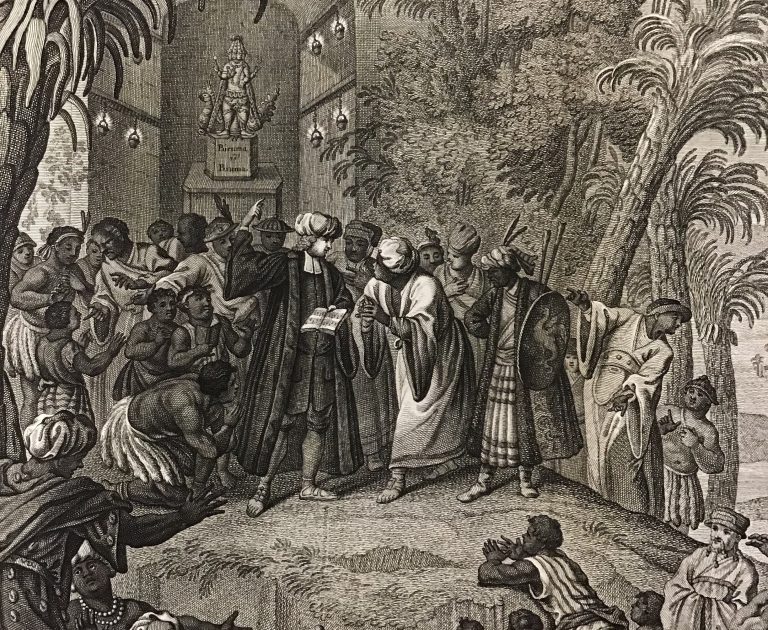 After my first visit I continued my studies of this book throughout Hilary Term: I compared the two extant books which are part of the Frederick William Hope Collection in the Ashmolean of which, so far, only its portrait-collection has been thoroughly studied.[2] To gather more information I found two digitisations in Dresden and Berlin to compare the books‘ arrangement and materiality further. I decided to concentrate on the visual dialogues within the Iubel-Gedächtnüswhich provided the opportunity to start thinking about global history as methodological and epistemological addition to the history of the book. This ambitious endeavour opened up a variety of insights about books as mediators in processes of ‘world-making’.[3] I will substantialise briefly the findings of my 2019/2020 MSt method option project by discussing two souvenir letters and their connection to the aforementioned engraving.

The most immediate visual dialogue I found was the portrayal of a missionary first depicted in Johann Jakob Kleinschmidt’s (died 1772) huge engraving (l: 56cm, h: 83cm) Vorstellung der Evangelisch-Ost-Indischen Kirche (Introduction of the Lutheran-East-Indian Church). The plate next to it explains that the depicted scene showcases the Royal Danish Mission to the Malabar Coast in India, portraits and even a map of India provide visual anchors for this explanation. The engraving depicts a scene of a missionary clad in a turban surrounded by indigenous people in varying dress. Two smaller prints in the Iubel-Gedächtnüs reference this scene of a missionary speaking to indigenous people. Comparing the two books in the Ashmolean and drawing on digitisations in Berlin and Dresden, I discovered the arrangement of the prints differed, but they always existed in pairs. The prints in the Berlin book even had coloured-in letter seals, which allowed me to make first hypotheses about the prints’ practical and commemorative function.

Ashmolean XXVIII.H.6a features individual prints on one large sheet, while XXVIII.H.6 features mounted double-sided prints (see image 2). Here, windows have been cut out so that the glued-on print may be admired from both sides: by holding the page against the light the glued-on borders are visible. Both prints feature copperplate writing which looks like handwriting but has actually been engraved like the other text and images (top image 3). This effect of writing and terms like ‘Geschrieben von Augsburg dem 2. July’ (written the 2 July) or ‘Dießer Brief’ (this letter) establish these prints not only as ‘souvenir-folders’,[4] but as letters. A ‘Jubel-Orden’ (order of jubilation) for young people in one letter (image 3 bottom, middle of left flap) supports Johann Burkhardt suggestion of this practice being a ‘Disziplinierungsakt [für] die Jugend’ (act to discipline the youth).[5] Like prints of engravings, so-called Gemählde (paintings), such letters and even card games were handed out to schoolchildren during celebrations in 1730 (Augsburg Confession) and 1748 (Augsburg Peace Treaty). These types of prints were giftable and became rewards even tools for instruction and education of the youth.

The letters’ accessible, instructional and interactive purpose also creates an alternative materiality and content of the festival itself. The first letter focusses on giving and saying thanks to God for the opportunity to finally celebrate the ‘Iubilæum’ (anniversary) of the Augsburg Confession. Reading first the fronts of the flaps from left to right, then opening the letter to its back and reading again from left to right develops a textual and visual procession (see GIF). The diffusion of ‘kings of the world and people in all places’ (Image 3 bottom, top flap) saying thanks is visualised through a waterfall flowing through all lands from the hill of ‘God’s word’ (Image 3, bottom middle). Below this is the illustration that is in visual dialogue with the Danish missionary plate. The ‘weiland Heyden’ (former heathens) have their own space to thank the person (scene depicted) who has, through the Augsburg Confession and kindness (Güte), guided them to God’s grace. The illustration’s location within the space of the letter and within the visual procession frames it as a successful result of the diffusion of the Augsburg Confession depicted in the middle. The diffusion of the Augsburg Confession evoked in the language of the psalms seems to achieve visual and physical reality through the ‘speaking’ heathens that are depicted kneeling in front of the missionary of the East-Indian Lutheran church.

The second instance of visual dialogue can be found in the same spatial location in another letter. Here, one European missionary baptises (Image 4, bottom flap, left) the indigenous people dressed in white while another missionary teaches the ‘true faith’ (right) (‘des wahren Glaubens [L]ehren’). The letter’s seal (face) depicts a lamb with a flag which represents the Moravian Church, a Protestant denomination predating Luther, that organised one of the first large Protestant missions alongside the Danish Royal Mission in the eighteenth century.[6] The two portraits in Kleinschmidt’s huge engraving (Image 1) present the Tamil transcription of the names of Bartholomäus Ziegenbalg (1682-1719) and Johann Ernst Gründler (1677-1720), the first two leaders of the Tranquebar Mission in India. From 1706 German missionaries members of the Danish-Halle mission were sent to the little Danish trading enclave of Tranquebar at the South-East coast of India. They laid the foundations for translations of the bible into Tamil, publications such as dictionaries and pamphlets all printed at Tranquebar as well as the establishment of Lutheran-Anglican ecumenic relations at British-owned Madras, north of Tranquebar, supporting many Protestant missionary societies in India over the next century.[7] By 1730, Ziegenbalg and Gründler were already deceased by ten years, the engraving seems to become a Iubel-Gedächtnüs in itself, celebrating the mission’s efforts and commemorating its founding members.

What constitute global connections in these engravings? The psalm quote and the image reference people in the ‘Welt’ (world) and ‘Lande’ (lands). The second letter’s seal provides a concrete visual connection to the global missionary work of the Moravian Church (spanning the Americas, Africa and Asia) and displays and contextualises a scene of Royal Danish missionaries.[8] Going back to the large engraving by Kleinschmidt, the people depicted wear head dress as well as clothes of varying foreign origin, for example a Mandarin hat from China, turbans and intricate robes from the Arabian peninsula and India and feathers and feather skirts originating in Australasia. The wealth of symbols and fashions frames these groups of people to differentiate them visually from the simple scholarly robe and white turban of the Lutheran missionary while also spatially subordinating them to the missionary. As Giorgio Riello has observed in sixteenth-century festival books, the juxtaposition of different foreign and familiar local dress creates divergence between a Lutheran Germany of familiar motifs and postures and the far-away.[9]Through this divergence difference actually is understandable through the lens of the familiar figure of the minister. This is what constitutes the global. It is an unexpected yet familiar connection between the here and the far-away. By looking for visual dialogues within the Iubel-Gedächtnüs I discovered a web of visual and textual references demonstrating the global connections and colonial interaction of not only Lutheran but Protestant faith.

Festival books and the global

Depictions of books are mostly situated in the middle of engravings which render them visual and material mediators. The removable note in the second letter narrates how Augsburg lost and gained the practice of Lutheran faith during the Thirty-Years’ War by  intervention of the Catholic emperor and the Lutheran King in Sweden respectively (Image 4, back, both depicted on top). The letter also visualises Augsburg’s journey towards religious freedom through the parallels between a weighed-down palm tree turning into one carrying an open bible (‘VERBUM DEI’) and the personification of Augsburg and her books in and out of shackles (Image 4, back, top and middle left and right). In Kleinschmidt’s engraving the Tamil Bible, catechisms and song-book become visual stepping stones for the spectator navigating between the missionary scene in the background and the explanatory foreground with its map of India, portraits and insignia. The interconnections of engraving and letters and the visual processions the letters display create a microcosm of the Iubel-Gedächtnüs as a festival book. Opening the Iubel-Gedächtnüs we are greeted by the address to the book (‘Anrede an das Buche’), similar to the letters’ seemingly handwritten address, which introduces the book as a messenger, aide-memoir and a mediator to kings and statesmen across Europe. What follows next is the festival’s schedule, which presents a similar scheme to what I termed ‘procession’ in the letters: several days of church services and readings for commemoration and thanks are concluded with a celebration of the Tranquebar Mission. Such practice transcends the materiality of the book by turning it into a cultural agent. This is further supported by books in engravings operating as visual references and symbols. The very local and Lutheran (hi)story of Augsburg, the visual narratives established through the book Iubel-Gedächtnüs and the engraved symbols and people referencing the Augsburg Confessions create a space that transcends far beyond the walls of Augsburg. The letters, as tiny summaries of the festival book, provide material and visual tools, consolidating familiar symbols, identities and narratives to make the global connections and developments of the Protestant faith intelligible for local celebrants and the European receivers of the Iubel-Gedächtnüs.[10]

How do my findings apply a global approach to the history of the book? The title’s emphasis on its visual material establishes the book’s emphasis on illustrations, i.e. visual culture. Textual explanations seem to come second. This reverses Thomas Rahn’s notion that illustration is ‘Komplement’ to the text.[11] In the Iubel-Gedächtnis the visual and material property of language disregards rhetorical finesse, which is typical for courtly festival books reporting on royal celebrations.[12] The different expressions of materiality – from the letter that can be cut-out to the engraved books as visual mediators – create a visual narrative that is subject to both the physical materiality of the book (cut-out letters) and the literary value found in the interconnections of image and text (personification and descriptions of the city of Augsburg). The book is not only a resource and carrier of text, but it also becomes an artefact. As ‘agents in the construction and reconstruction of culture’ books transcend various disciplinary criteria in literary, historical and material culture studies.[13] Such transdisciplinary thinking is also found in global approaches studying processes of ‘world-making’.[14] An example for world-making is observable in Iubel-Gedächtnis, where local and emotional histories (the Augsburg Confession and the Thirty Years’ War) become lenses that construct the different people and foreign places of the global (heathens joining the missionary church in India) for the European at home. Bringing together global history and book history is a very young, complex and heavily debated practice, I recommend to check out #globalbookhistory on twitter. This brief study hopefully presents food for thought for more discussion and exchange.

[6] Peter Vethanayagamony, ‘“I Appeal to the Whole Christendom”: The Place of Benjamin Schultze in the History of [the Lutheran -Anglican] Ecumenical Cooperation during the Second Quarter of the Eighteenth Century (1719–1743) -’ (Lutheran School of Theology at Chicago, 2006), 62–63, https://ezproxy-prd.bodleian.ox.ac.uk:2186/docview/304951261?pq-origsite=primo.

[12] Watanabe-O’Kelly, ‘Festival Books in Europe from Renaissance to Rococo’, 196

global connectionsHistory of the Book