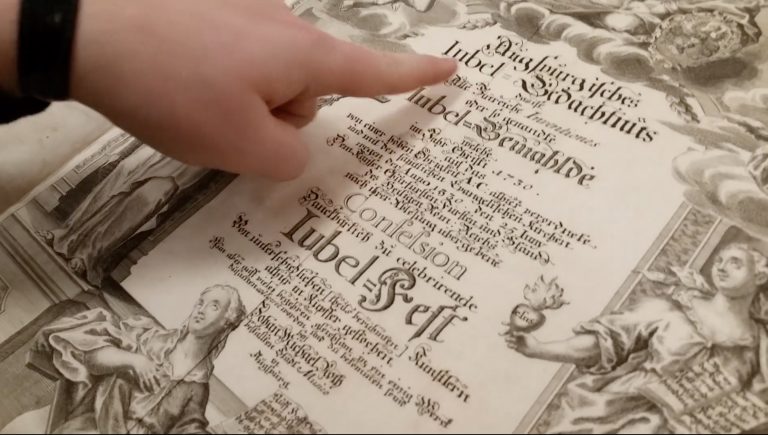 This term‘s focus is the research and writing of a project related to our course Palaeography, History of the Book and Digital Humanities. Having previously studied nineteenth-century carnival illustrations, I wanted to continue with the theme of festivals to trace identity formation through visual dialogue. Through SOLO’s, the Search Oxford Library Online Catalogue, tag listing eighteenth-century festival books in Germany, I came across a map of India and script in the Augspurgisches Iubel-Gedächtnüs from 1730 compiled by Johann Michael Roth, a city-musician of Augsburg (Shelfmark: Hope Collection XXVIII.H.6a) – a digitised version can be found at SLUB Dresden.

Festival books are commemorative publications full of impressive illustrations and decorative text celebrating religious but more prominently royal events like entries into cities, marriages, births, coronations and deaths.[1] An Oxford database lists all early modern festival books held by the British Library, the Bibliothèque de l’Arsenal (France), the Herzog August Bibliothek (Germany) and the British National Art Library in Victoria & Albert Museum. However, this merely scratches the surface of how many festival books were in production and circulation in the early modern age, especially between 1550 and 1700.[2]

Festival books are not accurate historical accounts of an event, they are rather the artistic representation and demonstration of royal power aimed to entertain subjects, impress rivals and catch a moment in time in form of print for the future. Festival books have not gone out of fashion today, but instead have shifted from the glorification and larger-than-life presentation of royalty and nobility to the celebration of a festivals organisation and purpose in programmes, leaflets, oversize books and objects. What we nowadays curate in immaculately composed Instagram stories – among others – was then published as oftentimes printed compilations of etchings, texts, collectible cards and postcards.

1730 saw the 200th anniversary of the Augsburg Confession where German princes handed articles of faith written by Philipp Melanchthon to the catholic Holy Roman Emperor Charles V to demonstrate their protestant confession. Next to the anniversary of 1517, Martin Luther‘s Thesenanschlag, the 25th June of a year ending with 30 in a century is a day for Reformation festivals. We can find records of festivals in 1630 as well as 1830 and 1930.[3]

The book itself is a very large folio, but seems to be a compilation of various print goods made for the 1730 festival who have been glued on paper and bound together. The most prominent figure depicted is Martin Luther, next to his network of friends and supporters, as well as stations in the history of the reformation like the Augsburg Confession in form of explanatory texts and illustrations. Interesting is also that most of the copper engravings have explanations for the depicted people, objects and scenes in plates with engraved text. This suggests an ambition to address a broad and even future audience, allowing us to actively partake in the visual festivities. More thorough textual analysis will follow in the coming weeks.

My main interest in this festival book was a comment in the catalogue on an engraving ‘concerning the propagation of the faith in India‘. I am working on tracing global connections in pretty much everything I find, so this was a phenomenal find, which did not disappoint. As can be seen in the video, a written extract states Danish missionaries in India had commissioned an illustration in Augsburg, which was turned into the biggest illustration of the book. Among the many religious insignia, landscape, diverse groups of people, a map of India and engravings in Tamil feature at the centre of the illustration titled ‘Vorstellung der Evangelisch-Ost-Indischen Kirche’ (Presentation of the protestant-East-Indian Church). These are exciting finds as they link the German imperial city of Augsburg with global developments and imperial practice of Protestant missionaries in the early eighteenth century.

This not only facilitates a global link but enables to study the contemporary representation of cross-cultural connections in a religious context. Naturally, not everything written in this festival book can be taken at face value and the etching must also be analysed with attention to the knowledge networks and shared practices and copies of artisans in Europe at the time. Ultimately, we find clues for global influence on the extensively systematised and ritualised framework of a German reformation festival book expanding the study of festival books itself.

Furthermore, a second book with the shelfmark XXVIII.H.6 is held by the Ashmolean. Similarities and differences between these two books will be discussed in a follow up post. Stay tuned!

[2] See for example the Stirling Maxwell Collection at the University of Glasgow or Karl F. Morrison, ‘“The Mask of Ceremony”: Rutgers’ growing collection of festival books with a list of holdings’, in Journal of Rutgers University Libraries, LXII (2006), pp.1-34