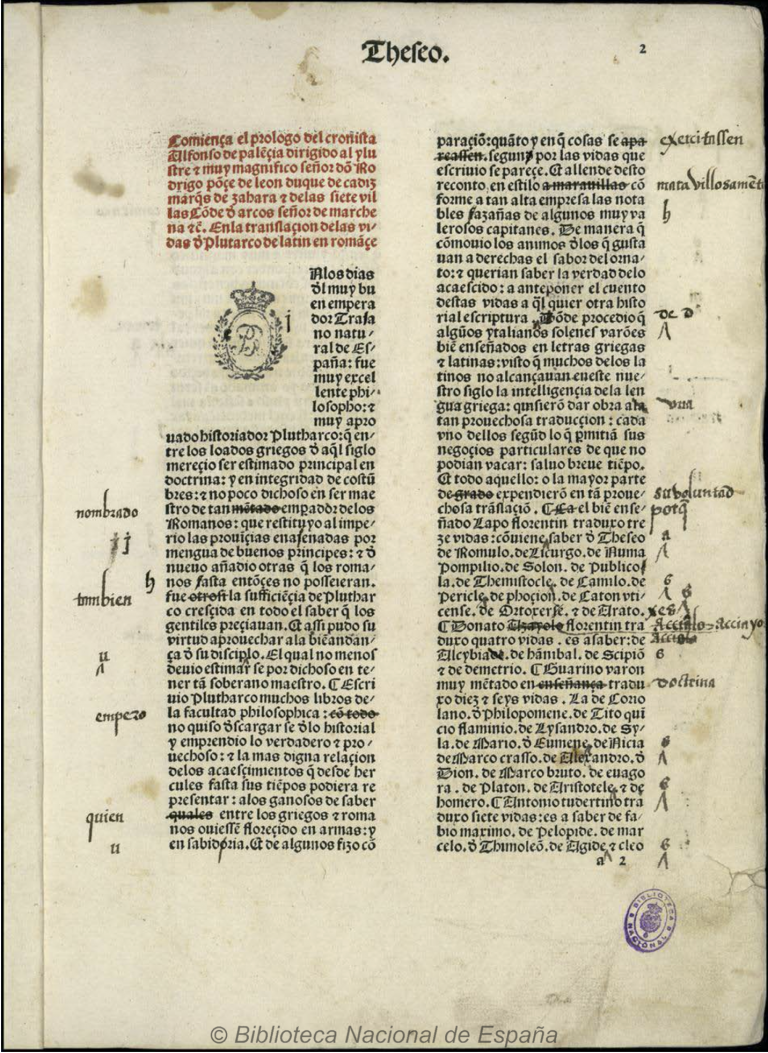 Was there an attempt at a revised edition Alfonso de Palencia’s 15th century translation of Plutarch’s Parallel Lives? Were there even multiple attempts?

Think back to your school days. You’re sitting in English class, feeling somewhat shell-shocked by Shakespeare, daunted by Dickens, or simply befuddled by the language of [insert name of difficult-to-read and long-since-departed writer]. You’ve been told that what you’re reading is English and most of the words do indeed appear to be English.

This, however, doesn’t change the fact that many of the words and the way they are used are simply foreign to you. “Nobody would ever talk like this in real life!” I remember one of my classmates saying in frustration. She wasn’t the first to feel this way and she certainly won’t be the last.

Take, for instance, the King James Bible, published not long after Shakespeare in 1611, which has often been cited as one of the most foundational and most influential texts of the English language. Read this short extract from the Gospel of St. John:

‘Then Jesus said unto them, Verily, verily, I say unto you, Except ye eat the flesh of the Son of man, and drink his blood, ye have no life in you. Whoso eateth my flesh, and drinketh my blood, hath eternal life; and I will raise him up at the last day.’ (John 6:53-54, KJV).

Now, compare this with the same verses but from the New Revised Standard Version:

“So Jesus said to them, ‘Very truly, I tell you, unless you eat the flesh of the Son of Man and drink his blood, you have no life in you. Those who eat my flesh and drink my blood have eternal life, and I will raise them up on the last day” (John 6:53-54, NRSV).

Which is easier to read? Unless you’re from 17th century England, I would have thought the second! Old, outdated words no longer in use such as ‘verily’ and ‘whoso’ appear, giving a modern reader pause. While archaic forms such as ‘eateth’ and ‘drinketh’ are not too dissimilar from their modern counterparts ‘eats’ and ‘drinks’, they nevertheless strike us as unusual and belonging in such old texts as these rather than in our ordinary, everyday speech.

Another example might be from the 18th century Anglo-Irish author Oliver Goldsmith’s novel The Vicar of Wakefield, which I had the pleasure of reading over the Christmas break. This novel was published in 1766 and Goldsmith’s language makes the year of publication unsurprising. Let’s look at the opening three sentences of Chapter 12 (on page 80 of the 1986 Penguin Edition):

“When we were returned home, the night was dedicated to schemes of future conquest. Deborah exerted much sagacity in conjecturing which of the two girls was likely to have the best place, and most opportunities of seeing good company. The only obstacle to our preferment was in obtaining the ‘Squire’s recommendation; but he had already shewn us too many instances of his friendship to doubt of it now.”

Several aspects of Goldsmith’s language immediately struck me as interesting. Firstly, he writes “When we were returned home”, whereas nowadays we would simply say: “When we returned home”. The use of ‘to be’ as an auxiliary verb for verbs of motion (to come, to return, etc.) in the past tense is a relic of English that has long since fallen out of use. Nothing at all strange for French speakers (who would say “Quand nous sommes rentrés à la maison”), but outright bizarre for modern Anglophones and many others. Secondly, who on earth says ‘sagacity’ nowadays? Wouldn’t ‘wisdom’ or ‘astuteness’ do instead? Thirdly, the only other place I’ve encountered ‘shewn’, an archaic spelling of ‘shown’, is in the previously mentioned King James Version!

One response to Goldsmith’s novel is to sit back and admire the archaic language, letting it transport you into 18th century England. Another response would be that, having read the book, you might be thinking something along the lines of: “A wonderful read, but those funny old words certainly made it difficult!” If you had the time and energy to do so, you might even attempt to produce a revised version in which those old words are ‘translated’ into their modern successors.

If you went for the second response, you would not be the first in history to attempt to bring a book’s language into that of the modern world. For example, a quick internet search led me to Shakescleare, an online resource that can be found on LitCharts at https://www.litcharts.com, designed to help students overcome the language obstacle of Shakespeare’s plays by including a modern English translation along with the original. In 1969, the Spanish publisher Odres Nuevos published what is effectively a translation of the 13th century Libro de Apolonio (Book of Apollonius) by Pablo Cabañas from Old Spanish into Modern Spanish. Both these projects were in some way inspired by the feeling that these old texts could be made more accessible to a modern audience by updating the language. Similar sentiments doubtlessly influenced those who produced later translations of the Bible, such as the New Revised Standard Version we met earlier.

Now, having made it thus far through this blog post, you may be wondering what on earth Bible translations and mid-18th century novels have got to do with 15th century Spain? Well, I strongly suspect that it was a similar story with Alfonso de Palencia’s translation of Plutarch’s Parallel Lives, a collection of comparisons of the most famous, learned, and heroic men of Antiquity. Someone read it, found much of the language to be archaic and outdated, and made revisions.

The rise of Humanism in 15th century Europe saw a renewed interest in Classical literature. Humanism was particularly strong in Italy, where many translations of Greek texts into Latin would surface. Many of these Latin translations would then be translated into the various European languages, French, German, English, Spanish by the scholars of these nations. This was what Alfonso de Palencia, a 15th century Spanish royal chronicler, scholar, and translator would do with the Parallel Lives. Palencia had encountered the Humanists and their work during his travels in Italy which inspired him to undertake the heroic project of translating the corpus of Latin translations of Plutarch’s Lives, produced by various Italian Humanists over the years, into Spanish. By 1491, Palencia had completed this truly Herculean project, which he dedicated to Rodrigo Ponce de León, Duke of Cádiz. The same year, Palencia’s work was printed in two volumes in Seville by the German printer Paul of Cologne and his companions.

The copy held by the Bibiloteca Nacional de España in Madrid has some interesting annotations, most likely made by someone during the first half of the 16th century in an attempt to bring the language up to speed with the times. The changes lack consistency, but there are some recurring trends. For example, initial Fs in several words are crossed out and replaced with H. This reflects an important linguistic change that took place in the Spanish language between the medieval and early modern periods, leading many words previously spelled with F to be spelled with H (such as hasta, meaning ‘until’, formerly spelled fasta). Furthermore, this individual has modernised certain archaic words, for instance, mentado (meaning ‘renowned’) is changed to nombrado. We cannot be certain who this mysterious annotator was, nor can we know precisely why the project never got past the recto side of folio 21.

This raises an interesting question: was this the only attempt to modernise Palencia’s translation? If the answer is no, then how do other attempts differ? Moreover, it strikes me as interesting to see how this, as well as other copies of the text were received and scribbled on by various readers over the centuries. For example, the copy held in the Taylor Institute Library in Oxford has been annotated in a different way, seemingly in order to signpost key parts of the text.

My friend and fellow History of the Book student Sam Griffiths and I are teaming up in the hopes of (Covid permitting) producing a partial digital edition of the copy in the Taylorian (a link to its SOLO entry will be provided at the end of this post), which will contain marginalia from as many extant copies from around the world as we can find. The fruits of our labour should be useful to scholars interested in the reception Palencia’s work. However, this digital edition would also be of use to anyone interested in reading the Spanish translation without the obstacle of the Gothic font!

I would like to give special thanks to Prof. Juan Carlos Conde of Magdalen College, Oxford for bringing this highly interesting copy of Palencia’s Vidas Paralelas to my attention in the first place, for encouraging me to work on it as part of my Michaelmas submission and for all his extremely insightful comments and suggestions. I would also like to thank Prof. Henrike Lähnemann for encouraging me to write this blog post, and Ye-Ye Xu for checking my French!

If you are a library that has a copy of Vidas Parallelas, or are interested in doing some research of your own (a good place to start would be on the Incunabula Short Title Catalogue website), then please don’t hesitate to get in touch. We welcome all thoughts, comments, recommendations and suggestions!

1 thought on “Unfinished Business? – Modern Revisions and The Intriguing Case of an Annotated Spanish Incunabulum.”