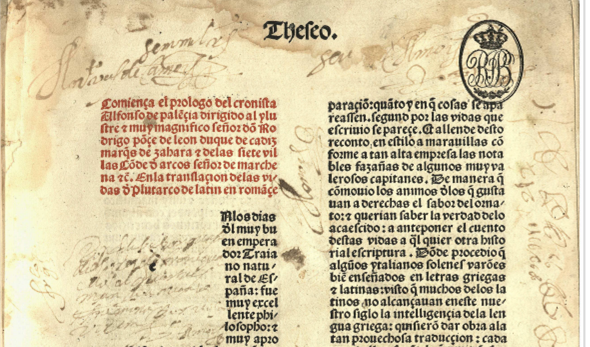 After an eventful life as a chronicler, translator, and lexicographer in the turbulent world of 15th Century Spain, Alfonso de Palencia settled down in Seville to produce what would be one of his final published works. Born in 1423, he spent ten years of his youth studying in Italy alongside some of the most prominent humanists of the day, returning to Spain later in life to become a royal chronicler, intervening in succession disputes to help bring Isabel I to the throne, and authoring the first Latin to Spanish dictionary, the Uniuersale Compendium Vocabulorum. From 1477, having lost his post as royal chronicler, he dedicated himself to his studies and to publishing his works, old and new.

Amongst these was one particularly Herculean task: a complete translation into the Spanish vernacular (‘romançe castellano’, as he calls it) of Plutarch’s Parallel Lives, a collection of biographies of key figures in the Greek and Roman worlds. Such was the scope of this endeavour that nobody would translate the work into Spanish in its entirety again until the early 19th Century.

The increasing influence of Humanist ideas and the classical world in Spain made this an opportune moment for the translation of the Parallel Lives, which was being rendered into vernacular languages around Europe at the time. Palencia had studied with key humanists in Italy and Spain and was a prolific and successful author and translator. His version, published, on July 4th, 1491, a year before his death, consisted of 57 chapters, bound in two volumes of about 350 folios each. Two copies of this hefty tome found their way to Oxford, one now residing in the Taylor Library, and another in the Weston.

So how was this ambitious labour of love received by readers and scholars?

Diego Gracián de Alderete, writing in the prologue of his translation of Plutarch’s ‘Morals’ in 1543, didn’t mince his words:

Hopefully doing justice to Gracián’s words, as I am well aware that he would be unlikely to be forgiving of any errors, I translate this as:

‘The ‘Lives’ of the same author, Plutarch, are translated in such a way into Castilian Romance, that they could more truthfully be called the ‘Dead’ or ‘Deaths’, since they are so obscure and false and riddled with errors, being in parts as different from the Greek original as black is to white’

Antonio Ranz Romanillos, who made the next complete translation of the Parallel Lives into Spanish, published between 1821 and 1830, wrote this in his prologue:

‘His translation frequently doesn’t convey the meaning of the original, and there are often whole pages in which the language makes no sense at all; so that I do not know how anyone could enjoy Plutarch when read like that. I can easily understand why this translation was forgotten for a long time, as it is impossible that it could gratify anyone’

Menéndez Pelayo, writing in 1952, sums up concisely, asserting that Palencia’s version was:

‘bad, and only noteworthy because of the era in which it was made’

Critics have been harsher or slightly more generous in their reviews, but the general consensus is that Palencia’s translation failed spectacularly to do justice to the original. The grammar and spelling are frequently inconsistent, and the text is heavily abbreviated, which doesn’t make for the most fluent reading experience. But the real problem is that it often doesn’t really make much sense.

Most agree that Palencia’s translation was so obscure and unfaithful to the original because he did not translate from the original text, but rather from a Latin translation. He was well-versed in Latin, Italian, and French, but apparently not a capable enough Greek speaker to translate from the original. Instead, he worked from Nicolas Jenson’s 1478 Latin edition, which compiled chapters from various translators, including a number of biographies falsely attributed to Plutarch.

These were some of the earliest translations of the work into Latin, and any slight departure from the original meaning in them could have easily been magnified and multiplied by Palencia, accumulating further errors and inaccuracies, resulting in the garbled meanings that we sometimes find in his edition.

The ISTC holds records of 43 extant editions of the work, scattered around Europe and the Americas[i]. Many of these are heavily annotated and scribbled on by readers. Published critique informs us about the reception of the translation, but marginalia can give us an equally fascinating insight into how readers throughout history have interacted with the work. Looking through an annotated book is a curious and enlightening experience, allowing us to enter into a dialogue with another (often long dead) reader, giving us an insight into their thought process as they make notes, comments, glosses, and doodles in the margins, or highlight passages of special interest to them.

Christian Tofte and I are in the process of creating a transcription and digital edition of the first chapter of Palencia’s Vidas Paralelas, in the hope that this work can be continued in future by other scholars. As part of our edition, we would like to include as much marginalia and annotation from the various copies around the world as possible, to be displayed in an interactive digital interface, showing the printed text alongside the marginal notes. We hope that this will help advance research into how the work was received, and the way in which readers interacted with it.

Copies we have already consulted show that readers found a variety of reasons to pick up their pens and leave their own mark on Palencia’s work:

Many readers highlight passages of interest to them. An annotator in the copy held by the Portuguese National Library, for example, uses manicules to indicate sections of interest, although, judging by the declining intricacy of their drawings, it seems their patience was wearing a bit thin as they progressed.

Some readers made corrections to the text. See Christian Tofte’s blog post on the annotator of the copy held in the Spanish National Library, who’s extensive marginal corrections suggest they may have been attempting to prepare an amended edition[i].

Annotated corrections can also be found in the copy held in the National Library of Chile. Take this passage on f.3.v, which describes the conception of Theseus. His father, Aegeus, is warned by the oracle at Delphi not to have sexual relations with any woman before he reached Athens with the wonderful (and apparently quite common Athenian) euphemism:

‘Great chief, the wine-skin’s foot must closed remain, ‘till thou to Athens art returned again.’

Aegeus, perhaps too dim-witted to understand the coded warning, fails to follow the oracle’s warning, and is ‘tricked’ into intercourse with Aethra by her father, Pittheus.

Our observant annotator amends a glaring error in the 1491 translation, correcting Palencia, whose version states that it was Theseus, rather than Aegeus who lay with (his own mother) Aethra, to impregnate her with a son (Theseus himself!). The annotator also makes a marginal note to clear up any doubt over the meaning of the passage with a euphemism of their own:

‘He shared a room and had carnal knowledge of that woman’

There are also several annotations which perhaps reflect less upon the reception of the work, and more on the human impulse to doodle, scribble, and make sure our pen is flowing well.

Do you have access to a copy? Can you help us to form a more complete picture by showing us annotations? We would love to hear from you!

Or with us directly by email:

We would like to thank librarians at the Taylor and Weston libraries for kindly arranging remote viewings and images of this work whilst libraries remained inaccessible.