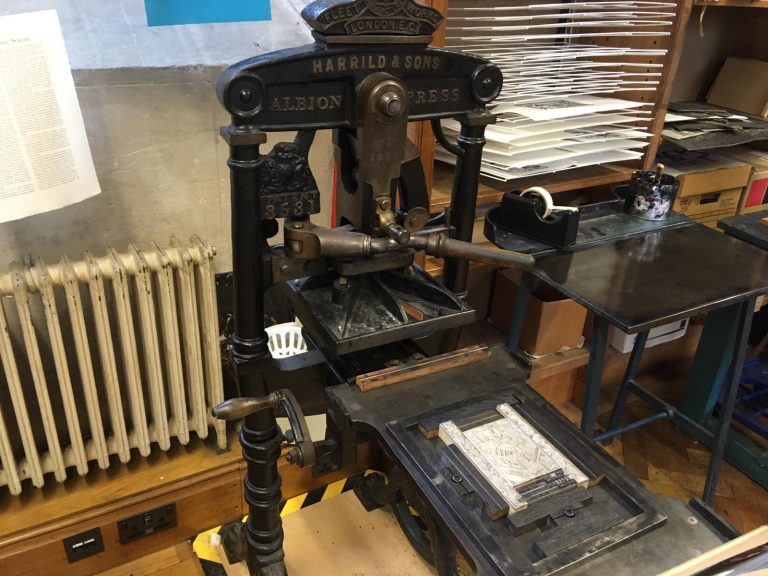 On March 4th, Agnes Hilger and I got a broad insight into the process of typesetting and printing in the Bibliographical Press of the Old Bodleian Library. In a previous blogpost, Agnes describes movable type, an invention that was revolutionary for the reproduction and spreading of texts. After having arranged our commemoration card for the upcoming 500th death day of the poet Sebastian Brant, Richard Lawrence introduced us to  the Harrild & Sons Albion Press (1877).

This iron hand printing press served as the vessel to get a neatly printed image of our typeset. The press got its name from Albion, a poetic name for England, which for example can be found in the Natural History written by Pliny the Elder who refers to England by writing “It was itself named Albion”. – Choosing a name that is a clear reference to England for this press most likely intended to establish a border between this newly invented English machine and the Chicago press.

If you mostly see books as tools to convey and receive information, visiting a printer’s workshop can certainly help to see printed editions from another perspective. It quickly gets apparent how much work has to be put into the production of a single printed page. All the elements needed can be examined independently and it can easily be understood in which way everything has to be put together on the printing press to get a neat result.

First of all, the framed typeset has to be fixed onto the printing press and paper has to be clamped onto the platen. By partially covering the paper with a frisket it is prevented from unintentionally relocating during the process.

After we set up the typeset and paper, another crucial component of the printing process comes into play: applying ink. In the most basic sense, the purpose of ink is to obliterate the colour of the paper. To get a satisfying and neatly-printed result, the type of ink has to be chosen very carefully. Especially when working with metal, it is crucial to use a rather sticky oil-based type of ink to make sure it forms a nice film on the metal surface.

As soon as the ink was applied to the typeset on the printing press and the platen with the paper was put onto the inked surface , we were ready make use of the Albion press. By using a crank lever, we moved the covered typeset underneath the press. After pulling another lever to heavily push the paper against the inked frame, the first issue of our commemoration card for Sebastian Brant was printed.

Working through the whole process from typesetting to printing was a fascinating and valuable experience. Not only did it give us an idea of how time consuming it must have been to put a whole book (or a pamphlet) together, but it also made us appreciate all the different components needed to produce a print or a whole printed edition.

Lastly, I would like to point out an observation about mistakes that was important to me while we were working on our prints: From a printer’s perspective spotting mistakes or imprecise work is indispensable to improve your own work. Closely analysing the composition made by another printer can have an immense impact on actually understanding the art of printing a bit better.

If you would like to learn more about the printing process, I highly recommend watching the Practical Printing with Richard Lawrence mini series.

1 thought on ““It was itself named Albion”: Learning to Print with an Albion Press”