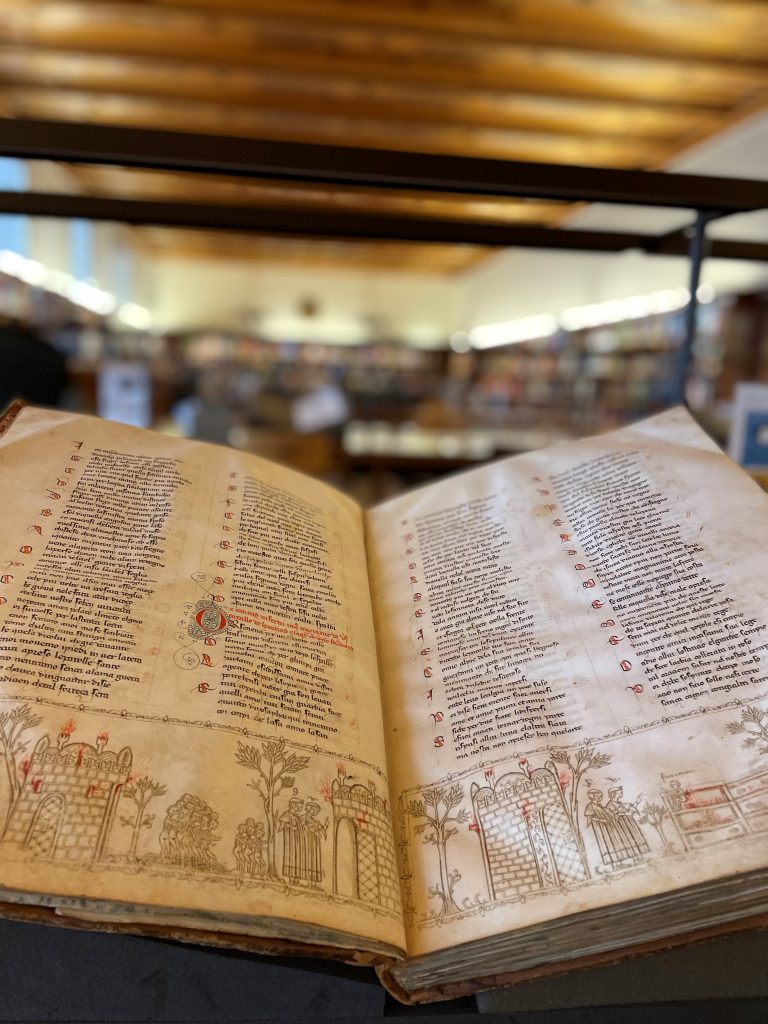 I am sat in the Weston Library, currently the only student in the rare books room, looking for the first time at MS. Canon. Ital. 108 in person. I have stared at, analysed, and laboured over scans of its pages from afar for the last few months. This term I am back in Oxford having completed the first two thirds of my masters virtually from the Channel Islands, and as soon as I got back here I inquired about ‘meeting’ this manuscript. I was incredibly excited to finally be able to hold it and appreciate its materiality first-hand, and I found myself surprisingly emotional when I first opened it. I have been telling anyone who would listen about how beautiful this manuscript is for the last few months, but the scans do not compare to the real thing.

My friend and course-mate Holly and I have been creating a digital edition of the ‘Ante-Purgatory’ section of this manuscript which will be launched online soon as our History of the Book project. In order to do this, we divided the 9 cantos that make up this section in half, and each transcribed and encoded a portion of the text. I worked on cantos 1 to 5 with Holly working on cantos 6 to 9. In order to do the manuscript justice and to make our transcription as accurate as possible, we went over these cantos again and again. All of that time looking at the digitisation of each page may have allowed me access to the handwriting on the page, but I don’t feel that I truly experienced this manuscript as a real-life book until now.

Opening the protective case to get my first glimpse felt not entirely dissimilar to unwrapping a present on Christmas morning. Even more so, finally opening the book and looking at the pages. What first struck me is how small the writing is. It seems obvious to me now, but most of the time that I spent looking at the digitisation, I was quite zoomed in. The scanned images were so high quality that it didn’t compromise the legibility at all. It was something of a surprise to see that the ‘big’ decorated initials at the beginning of each canto are smaller than my thumbnail. This goes for the drawings in the lower margins, too: the details are so small and precise. I hadn’t appreciated fully the level of skill and mastery involved in their construction, but it is evident when looking directly at them.

The texture of the parchment and the crackling noise it makes when you (gently!) turn a page took me by surprise. The parchment is thinner than I expected and quite warped in some places. Some elements of the colouring are also clearer in person. I was also delighted to find that the gold decoration at the beginning of Inferno 1, Purgatorio 1 and Paradiso 1 is shiny! The difference between the various red inks that have been used is also more apparent now – the reds used at the beginning of some cantos to decorate the first letter are much brighter and more vibrant than those used to decorate the first initial of each tercet in particular areas of the manuscript. Another thing that I hadn’t seen when scrolling through the section I was working on online was that in other sections of the manuscript, there are manicules, little hands which have been drawn in with a finger pointing at a particular line. The manicules on folio 27 verso are used like an asterisk or a footnote marker: one manicule points to the annotated line, and a matching one points to the annotation.

I have not spent much time looking at the Paradiso in this manuscript: we used images from the lower margins of Inferno and Purgatorio on our Twitter, and have transcribed and encoded the first nine cantos of Purgatorio for our main project. The Paradiso is not accompanied by drawings but is densely annotated by multiple hands. The ink of the text itself is much lighter than elsewhere, appearing more brown than black, and is less clear on the page.

In the essay that I handed in alongside this project, I spoke about the manuscript as an artefact, as a cultural object. I have never appreciated the true sense of this as much as I do this morning, seeing the layers of text, illustration, colour and annotation that have been added by many people over time to turn this manuscript into what it is today. I am so appreciative that the digitisation of this manuscript is available online – without that, I would not have been able to complete this project – but finally being able to flip through and glance over the pages is a wonderfully enriching experience.

Katie is taking the MSt in Modern Languages at Somerville College, focusing on Dante’s ‘Divine Comedy’. She did her undergrad in French and Italian, also at Somerville, and is particularly interested in Dante’s use of song in Purgatory.

2 thoughts on “Meeting the Manuscript: a first in-person interaction with a 14th Century copy of Dante”