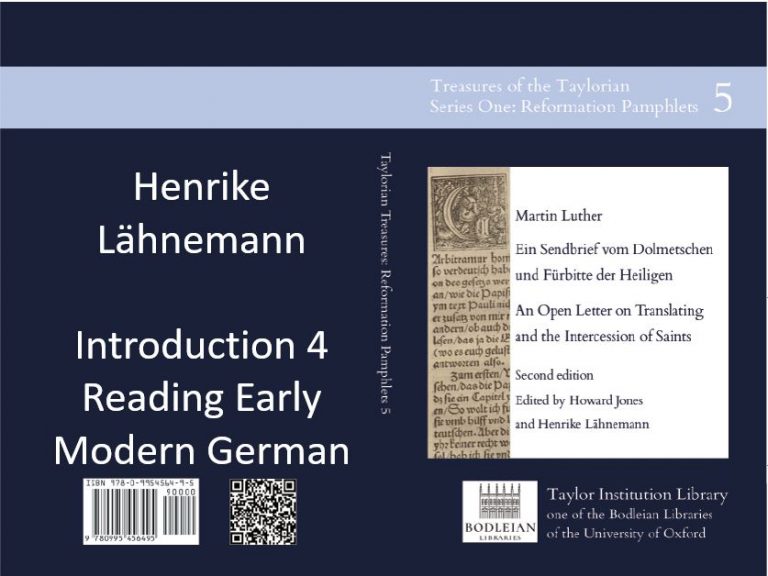 This is part of a series of introductory posts for the updated edition and translation of Martin Luther’s Sendbrief vom Dolmetschen und Fürbitte der Heiligen (An Open Letter on Translating and the Intercession of Saints), published as Volume 5 of the Treasures of the Taylorian. Series One: Reformation Pamphlets.

The following is meant as a practical guide for studying early modern print publications and – preferably – for reading them out aloud. Early modern German was written to be performed. Luther’s audience would have had exposure to German verse and prose largely as listeners, whether through mystery plays, sermons, or public performance of the works of the ‘Meistersinger’. The best approach to what may seem at first to be an impenetrable succession of clauses is therefore to read them aloud, particularly since Luther wrote the Sendbrief to argue for the importance of idiomatic expression and the ‘street value’ of language.

We have not normalized the spelling, because the inconsistency is part of the reality of written German at the time. The short guide below is intended to help the modern reader decipher the transcription and enjoy the rhetorical flourish of Luther’s style. The main rule of thumb is to pronounce the words like their modern German equivalents regardless of differences in spelling.

The equivalent modern German text with normalized punctuation, capitalization, no abbreviations, and umlaut: