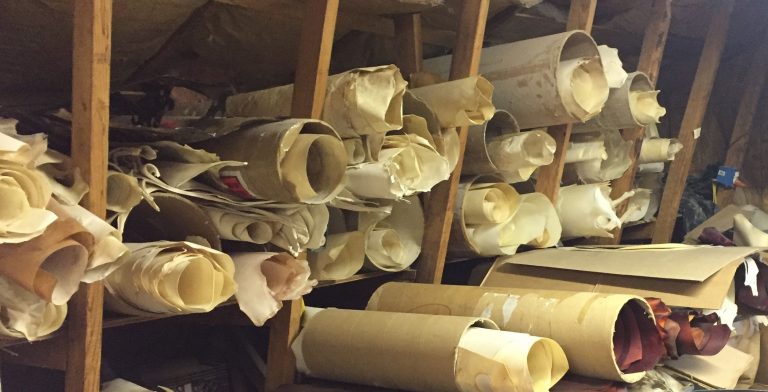 One’s interests can ebb and flow unpredictably…and I have observed how some of my own passions have quickly bloomed…and then swiftly subsided. One such “flare-up” (which I feared would prove temporary) developed twenty-two years ago after being blind-sided by a simple yet captivating exhibition about parchment at Kloster Bebenhausen, a beautiful Cistercian monastery outside of Tübingen, Germany. Seduced by the materiality and faunal origins of parchment, my interest grew, firmly persisted, and can now safely be called an enduring obsession.

By 2018, I had amassed a considerable collection of German publications about parchment’s history, manufacture, and preservation. My mother had bestowed her children with the gift of her native tongue, German, which allowed me to enjoy these articles alongside those in English. I began to imagine what fun it would be to translate the German texts, which would combine my love for artist materials, language, and art history. Naturally, this led me to google: ART – HISTORY – TRANSLATION, a search that produced Art in Translation (AIT), a quarterly e-journal that publishes art historical texts in English translation. What a perfectly thrilling discovery!

At first, I proposed a single text to AIT, one that focuses on different types of thin parchment by Henrik de Groot. Particularly fascinating is the author’s discussion of the so-called goldbeater’s skin, a ridiculously thin, diaphanous membrane prepared from a cow’s caecum. At one time, this material was used as interleaving between layers of gold being pounded by goldbeaters or by conservators mending parchment, a collagenous cousin. The proposal to translate de Groot’s work was accepted. Feeling encouraged, I mentioned additional parchment-centric publications that might be of interest. Slowly, the project evolved and finally culminated with a plan to dedicate an entire AIT issue (for the first time!) to technical art history; in this case: PARCHMENT.

It’s fairly easy to grasp the basic steps that transform a raw animal skin into a useful material for manuscripts, documents, correspondence, membrane thread, templates for bobbin lace, and reinforcement for codices and textiles. Familiar steps – washing, liming, scudding, stretching, scraping, pouncing – are dependable terms that anchor our understanding of the general process. Reading these terms in German posed few obstacles, yet translating them was a completely different enterprise. Wattenbach, in particular, enriched his book with dozens of passages in languages other than modern German including Latin, Greek, medieval French, medieval German, medieval Dutch, and Italian.

Wattenbach rarely paraphrased his sources. Instead, he reproduced every poem, letter, and document he could find that mentioned parchment. It seems Wattenbach was a polyglot. I am not. So, for the Latin and Greek passages, we enlisted the help of art historian Andrew Griebeler. For the others, I set out to find specialists who might correct my imperfect interpretations of medieval German. Dr. Henrike Lähnemann not only amended my attempts, but did so with generosity, enthusiasm, and impressive swiftness.

For example, Wattenbach included the following proverb from Freidank’s Bescheidenheit (104, 11a-g, 13th century), because of its use of permît, a variant of the Latin Pergamen (parchment). It was not only individual words that proved troublesome, but the subtleties of tone that evaded my comprehension.

If the sky and the wide world were parchment,
and all of the stars God created were scribes,
they could not record the wiles of women.

I had originally translated himel as heavens, wît as ink, and wunder as wonders. Himel, depending on the context, can mean heavens or sky. Heavens carried too spiritual and poetic a tone, while sky is more appropriate for this particular excerpt. I had found an extant translation in which wît was translated as ink and temporarily adopted it since it made sense in the context; in fact, wît means wide. So, ertrîch wît = Erdreich weit, in other words: the wide world. Finally, I had interpreted daz wunder der wîben too literally as the wonders of women. Dr. Lähnemann immediately recognized Freidank’s ironic tone and suggested finding a less complimentary term and supported this revision: the wiles of women.

Wattenbach also includes part of a fifteenth century poem. I recognized the agitated tone and originally translated so ruwet mich as angers me. This turned out to be in the wrong spirit. Instead, the speaker laments the use of wax and parchment for extra-divine ventures. Was appears in the first line and means Wachs = wax; a subsequent reference to kerczen = candles confirms the word’s meaning. Hude was obvious since the subject at hand is skin and parchment: Hude: Haut = skin. Somewhere in the depths of the internet I found the term nocz translated as night-time. Nocz, however, means Nutzen, in other words use or benefit. Again, Dr. Lähnemann adjusted the translation to elucidate its message.

Therefore, I greatly lament wax
and skins even more,
which are spoiled for such things,
which will benefit no one.
Candles should be made from wax,
and lit in divine service,
Sheepskin should bear wool,
Then no one would be allowed to complain about documents.

Wattenbach’s strength lies in the references he painstakingly assembled for our benefit. I have relied on kindred spirits whose expert input helped accurately decipher Wattenbach’s many citations. Through translation, these parchment-centric texts will become more broadly accessible and will expand and enrich our understanding of this enduring and versatile material. My own obsession with parchment has only deepened, as has my appreciation for all who helped usher this project along.

The images included in this post were taken in 2018 at Pergamena, Jesse Meyer’s parchment studio in Montgomery, NY.