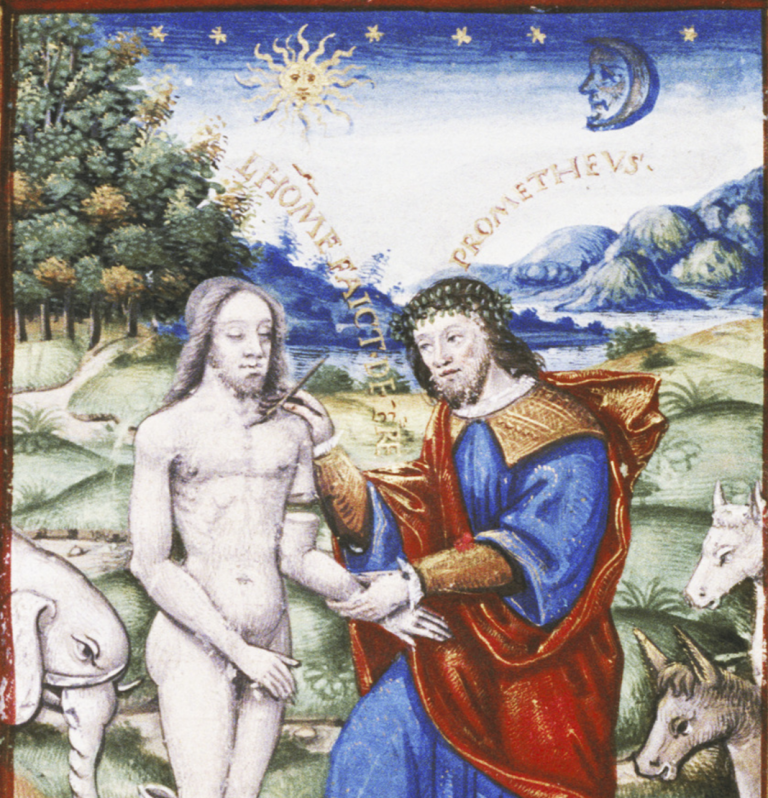 The narratives lurking just beneath the surface of a book – the intertwining threads of its inspiration, creation, and original owner – are frequently overshadowed by the story told by the visible words on the page. However, investigating this hidden history often uncovers a surprisingly complex web of movements and connections traversing physical, temporal, and linguistic borders.

Such is the case with MS. Douce 117, a sixteenth-century illuminated manuscript of Clément Marot’s French translation of Book I of Ovid’s Metamorphoses. The description of the manuscript in the Bodleian’s online catalogue of Western manuscripts tells a simple story: it is dated after 1531 and the summary catalogue entry states that it was no doubt the presentation copy to the king. At first, these deductions appear logical: known as the ‘Prince des poëtes François’, Marot was the leading poet in the court of Francis I, and the high-quality parchment, lavish illuminations, and opening dedicatory epistle to the king all appear to support the hypothesis that the manuscript was a gift from Marot to his royal patron. Furthermore, the first printed version of Marot’s translation of Book I of the Metamorphoses was not published until 1534. In the absence of any more obvious chronological clues, the hypothesis that the manuscript was created after 1531 appears reasonable and appropriately cautious. So far, so straightforward.

However, when MS. Douce 117 is examined in relation to Marot’s life and work as a whole and within the greater context of the printing and circulation of various editions of the Metamorphoses in early modern Europe, a more nuanced and ambiguous narrative emerges. In the dedication to Francis I, Marot alludes to an occasion on which he gave a partial reading of the translation to the king during a sojourn at Amboise. Historical records indicate that Marot and Francis were at Amboise at the same time in 1526, and several scholars of Marot’s work have speculated that this is the occasion to which he refers (1). This theory suggests that Marot may have begun the translation as many as eight years before it first appeared in print in 1534, indicating that the manuscript may in fact have been created before 1531.

It has been suggested that the identity of the manuscript’s illustrator may shed light on the date of its creation. The illuminations have been attributed to Guillaume II Leroy, an illuminator and engraver who was either the son or the nephew of Guillaume I Leroy, a Lyonese printer (1). Guillaume II Leroy provided the illustrations for a printed edition of the Metamorphoses published in Lyon in 1510, several of which closely resemble the miniatures in the manuscript. The first woodcut (Figure 2) in particular is strikingly similar to the depiction of the creation of the world in Marot’s manuscript (Figure 1): God is depicted in the foreground surrounded by his newly created animals, including a lion to the right and a deer to the left. In both images, he is also flanked by a group of trees on the right and a rock depicting chaos on the left, with the sun and moon overhead.

The fact that Leroy died in 1528 appears to support the hypothesis that Marot began his translation in the 1520s and gave a preliminary reading of it to the king during the 1526 sojourn at Amboise. However, this conclusion only stands if the illustrator of MS. Douce 117 is indeed Leroy, and an examination of the manuscript alongside other artistic renderings of the Metamorphoses circulating in Europe in the early sixteenth century suggests that simply comparing the illuminations to contemporaneous printed illustrations may not reveal the identity of the illuminator after all. Many of the woodcuts from the 1510 Lyonese edition attributed to Leroy were closely modeled on illustrations in Giovanni Bonsignore’s Italian translation of Metamorphoses published in Venice in 1497. As the first illustrated printed edition of Ovid’s poem, this work was most likely the only template available to many artists and inspired a number of craftsmen working in a variety of mediums. Many of the illustrations in an edition of Raphael Regius’s Latin text and commentary of the Metamorphoses, published in Parma in 1505, were also modeled on the woodcuts in the 1497 Ovidio metamorphoseos vulgare. Furthermore, the woodcut in the original 1497 Italian edition depicting the contest between Apollo and Marsyas (Figure 3) clearly influenced Michelangelo Anselmi’s painting of the same subject, completed in the 1540s (Figure 4)  (2).

The similarity between the woodcuts in the 1510 edition of the Metamorphoses printed in Lyon and the illuminations in MS. Douce 117 therefore cannot be considered definitive proof of Leroy’s involvement, especially since Leroy’s woodcuts were already modeled on those of another artist. Consequently, Leroy’s death in 1528 does not rule out the possibility that Marot presented the beginning of his translation to Francis during a second sojourn at Amboise in 1530, four years after his appointment as the king’s valet de chambre in 1526.

Furthermore, textual clues from Marot’s other works indicate that he commissioned multiple manuscripts of his translation, one of which he presented to the Duke of Lorraine in the winter of 1530-1531 when the Duke was visiting Paris for the marriage of Francis I to Eleanor of Austria. It therefore seems most likely that Marot commissioned the manuscripts at some point in 1530, rather than after 1531, as the Bodleian catalogue suggests.

The fact that more than one copy* of the manuscript was created raises the question of the original ownership of MS. Douce 117: was it truly a gift to the king, as the Summary Catalogue entry claims? Francis I was an enthusiastic patron of both the literary and visual arts, with a particular interest in classical poetry. It is certainly plausible that Marot presented one of the manuscripts to the king as a gift, and the opening dedication appears to support this theory. However, the epistle also appears in printed editions of Marot’s translation, indicating that it was not unique to MS. Douce 117.

The historical details of Marot’s manuscript – the precise date of its creation, the identities of its illustrator and original owner – are therefore far more complex and mysterious than the library catalogues suggest, and perhaps, in the final analysis, unknowable. However, peering into the past of MS. Douce 117 does shed light on the circulation of texts and images in early modern Europe and the dialogue between manuscripts and printed books in the age of the printing press. Investigating the origins of the manuscript reveals a web of movements and images that flicker in and out of focus – a shape-shifting quality well-suited to a translation of the Metamorphoses, whose opening prayer to the gods declares Ovid’s intention to ‘speak of forms changed into new bodies’ (3). To encounter MS. Douce 117 is to encounter the early modern book, with a protean chaos of shifting shapes and forms transformed rippling beneath its surface.

2. Sarah Schell, From the Library: The Transformation of Ovid’s Metamorphoses. Washington, D.C.: National Gallery of Art, 2013.

*I am currently searching for another manuscript of Marot’s translation, which was sold at an auction of the library of Lucien Graux at Druot in 1957 but has since seemingly disappeared from the bibliographic record. It has five illuminations: 1. the division of heaven and earth into five zones, 2. the regions of the four winds, 3. the metamorphosis of Lycaon into a wolf, 4. the Flood and Deucalion and Pyrrha, and 5. Apollo and Daphne. The Latin text is also written in the margins, and the translation begins as follows (Figure 5):