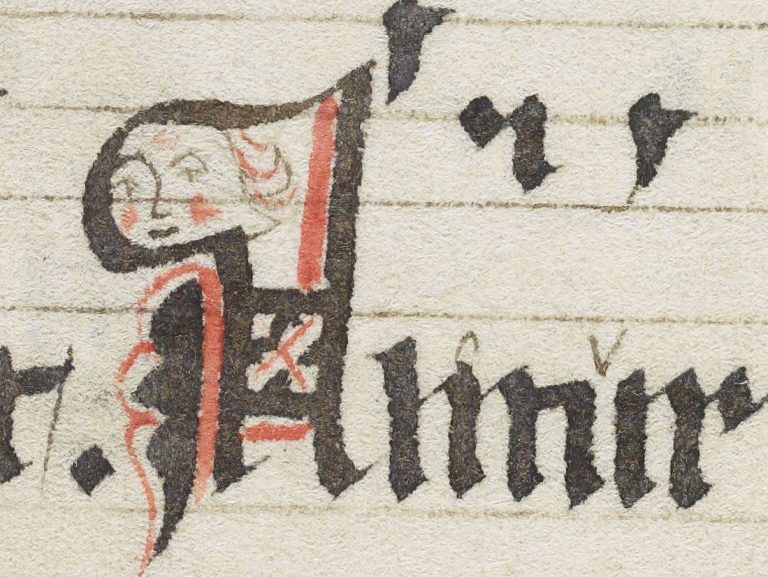 Yesterday, in preparation for a Gregorian chant workshop and as part of the History of the Book show-and-tell sessions, Dr Andrew Dunning, R.W. Hunt Curator of Medieval Manuscripts at the Bodleian Library, University of Oxford, opened the Handbook of the Medingen Provost, Bodleian Library MS. Lat. liturg. e. 18. A full digitised copy is available, thanks to the Polonsky German project, at the digital.bodleian resp. hab.bodleian.ox.ac.uk

This made me think back to my earlier encounters with the manuscript. I started working on it while I was still in Tübingen, alerted by my (now) predecessor Nigel F. Palmer to the Medingen Handbook as a key document to understand liturgy and performance in the time of reform at the convent.

He helped me reading the text through microfilm print-outs sent via post in 1999:

I then had the opportunity to come to Oxford for a year in 2001/2 and have access to the manuscript itself in the beautiful setting of Duke Humphrey’s Library, supervised and helped by the manuscript curator, Dr Martin Kauffmann. It was exciting to discover the delicate colouring and rubrication of the pages, making it much clearer how to coordinate music, actions, and words. I wanted to show it to an art historical colleague to compare with manuscripts in Hamburg – but the photo orders had a waiting time of up to six months. What to do? I had a pen-shaped “spy cam” with which I furtively took two shots of the key illustrations I had to share in colour (I have owed up to this action at the occasion of my Inaugural Lecture and got absolution from Martin)

In 2006, I moved to Newcastle and started working on editing the prayerbooks of Medingen. I realised I needed to edit the key document. Fortunately, by 2011 the Bodleian Library had lifted its restrictions on taking photographs and I was able to shoot a record of the whole manuscript in colour – albeit tinted in greenish hues resulting from the artificial light used in the basement reading room under the Science Library where the manuscript reading room had temporarily moved to. Again with the patient help of Martin Kauffmann, I leafed through the folios, trying to figure out quire formulas and finding the tiny traces left in the process of eradicating and editing the Manual.

A complete shift in gear has since happened, with the Polonsky German project allowing the full digitisation at the highest available specifications, with a proper size and colour indicator, linked up with meta data and available for embedding in further projects via IIIF. This allows zooming in to details such as the tiny face in the initial A for “Alitur”, seeing how red brushstrokes are highlighting the cheeks and the underlying structure of the parchment.

Returning to Oxford in 2015 to take up a permanent job, I was delighted to be able to work again with the Medingen manuscripts as physical objects, particularly for teaching ‘Palaeography, History of the Book, and Digital Humanities’.https://www.youtube.com/embed/iy518RvosY4?feature=oembedSpecial session for the DPhil students of the Leverhulme Doctoral Training Centre ‘Beyond Print’ directed by Dan Wakelin

One of the last library visits before lockdown was with the Master students at the Faculty of Medieval and Modern Literature. to see the manuscripts in the Weston Library. This blog post also contains some of our experiments with embedding short films into documenting library visits.

With all the classes going online on teams, this has been taken to a new level, with particularly Alex Franklin and Andrew Dunning experimenting with a number of different set-ups for visualiser, smartphone(s), laptops as well as book rests and snakes to make it possible to consult manuscripts from afar (NB: so convincingly that I yelled out a warning to a student raising a coffee cup on teams, fearing it might endanger the manuscript which Andrew Dunning presented in another teams window).

So: how has digitisation changed the way we interact with manuscripts? It is like with the introduction of printing: printed books have not replaced manuscripts, rather imbued them with additional meaning and added a new layer of significance.