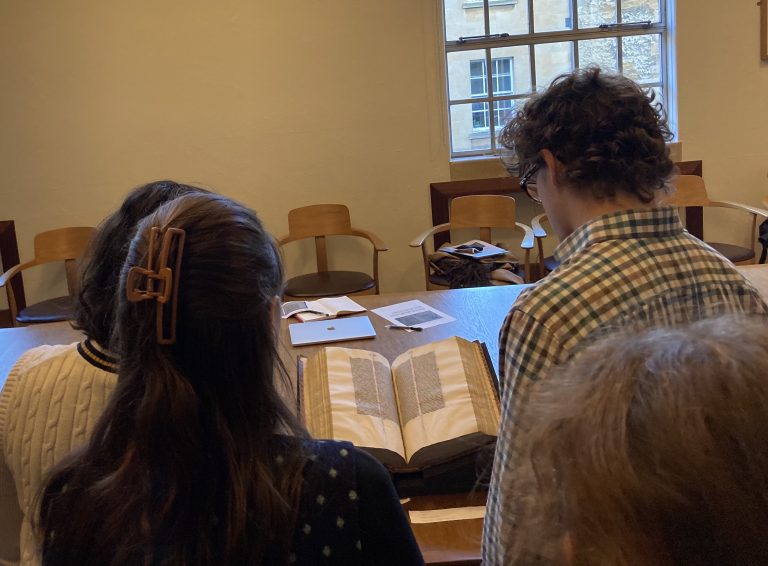 Having spent the last five weeks building up our knowledge of manuscripts from paper, to ink, to assembly, to binding, last week’s Latin palaeography session finally brought us to the styling and construction of the letters and words themselves.

Our crash-course began with Dr Laure Miolo introducing us to the three principal levels on which paleography operates: What, How and Why. Or, less succinctly- how to recognise the script, how the script has evolved over time, and the study of these scripts as a historical phenomenon.

Stepping back from the primary materials for a second, our session began with the ‘Why’ of the subject, with Dr Miolo taking us back to the inception of palaeography – Jean Mabillon’s 1681 publication De Re Diplomatica. With the original goal of helping differentiate genuine documents from forgeries, Mabillion’s Diplomatics represents the first focused effort to gather, sort and categorise Latin manuscripts by all variety of palaeographic features – but here, most pertinently, by their scripts. He divided what he found into five categories of scripts – Antiqua Romana, Gothica, Longobardica, Saxonica, and Fraco-Gallica – thus ordering them by nationality and copied all the examples himself (inspiring us with his productivity amidst our fifth-week blues). The term Palaeography itself, however, appeared first in what must have been the seminal work of 1708, Bernard de Montfaucon’s ‘Paleographia Graeca’. This text by a Benedictine monk was concerned primarily with Greek scripts, but nevertheless gave its name to a broader field of study: the ‘science of studying ancient books’, as it may literally be known. Institutional study of palaeography took longer to develop – first with Leopold Delisle and the Ecole des Chartes in 1821 and only gathering momentum with the advancements of Ludwig Traub, who began using script as evidence in plotting the history of a book, establishing a causal link between palaeography and Latin philology for the first time.

Stepping into this noble tradition, Dr Miolo brought us back to the first point of paleographic study: recognising what exactly it was that we were looking at. What followed was an influx of new and exact vocabulary, so buckle up. The two main approaches to examining script, we learnt, are morphology (looking at the letters and graphic symbols, the basis for typologies), and ductus (the analysis of pen strokes: number, order, and direction). The handwriting itself may then be considered as either set or constructed (written with a broad, flat nib), or cursive (which contains fewer lifts and is sometimes more careless). Finally, the script may be either majuscule (two-line) or miniscule (four-line, with ascenders and descenders reaching above and below the other letters respectively).

As my own handwriting began to lose all form and sense under the weight of this new vocabulary, Dr Miolo dived into the different types of scripts we may encounter – Uncial, Half-Uncial, Insular, Insular Half-Uncial, Insular miniscule, Pre-Caroline miniscule, Caroline miniscule, Gothic, and Humanistic. While a detailed description of all these scripts and their cross-over episodes would probably constitute an essay within itself, here I will dive into a more detailed description of two the scripts that, for when you tell non-palaeographers about your session, have the most unique and impressive-sounding names: Caroline miniscule, and Proto-Gothic.

Caroline miniscule emerged in the late 8th century and was the result of three different forms of Continental handwriting colliding at once. There was a great bureaucratical need for a common writing for the production of books, and Caroline miniscule emerged to fulfil it. In comparison to pre-Caroline miniscule script, the letters were now regular in height, easily legible, had almost all ligatures eliminated, and showed a far greater degree of word separation – all of which contribute to its suitability as a bureaucratic and widely disseminated script. The essential elements of this script are also minimal – again, to increase its universal intelligibility – and include  b, d p and q, which are now composed of both a shaft and a lobe (before this it was difficult to differentiate between b and t, and b and d), and a in its uncial form.

Proto-Gothic, meanwhile, is the epitome of a transitional script. A late development of Caroline miniscule, the term ‘late Caroline script’ can also be deployed here, but it’s emergence signifies a period of scriptural evolution linked to increased textual output under the bureaucracy of normal rule. The era of its development saw a strict delineation between book script and documentary script emerge: by the mid-12th century, official documents were no longer being written in the same hand as books or private textual productions. This distinction becomes increasingly pronounced towards the middle of the 12th century. Proto-Gothic, in its book form, features such essential elements as wedged-shaped serifs on ascenders and a rounded ‘r’ (remember this!)The documentary form of Proto-Gothic, meanwhile, was more cursive (most likely to increase the production rate of these bureaucratic documents) and featured more pronounced ascenders and descenders. Indeed, while the book hand is almost majuscule, its documentary form is most definitely a miniscule script, with the same distinctive wedge-shaped serifs clearly demonstrating a four-line format.

The second half of our session saw a familiar return to form: peering over the manuscripts Dr Miolo had gathered for us, trying desperately to tell the age of them by their script alone. Progress was… slow, but definite. Dr Miolo guided us through the essential elements the distinctive ‘a’ of an uncial script (which looks like two Cs pressed together), the wedge-shaped serifs of the Caroline script. Some confusion over the miniscule/majuscule distinction persisted. How rounded a script had to be before it tipped over into (or out of) Proto-Gothic? How high exactly does an ascender or descender have to reach above the other letters before it becomes a four-line script? Answer: any height the scribe wants it to be, just as long as its reaching up over the other letters.

In the examples of Humanistic script, which developed in reaction to the widespread use of Gothic at the end of the 14th century, we were able to see how political and philosophical movements made their impact on palaeographic history, with the script laid out before us not only demonstrating a regulated, beautified hand through which an Italian cultural revival was communicated – but the first introduction of the question mark! Who’d ever stopped to wonder when that was introduced?

This session gave us the chance to step outside the history of the book itself and see a broader tapestry of politics, culture and philosophy play out in the palaeographic evidence before us. In the clashing, combining and transitioning from one script to the next, we can now plot the movement of insular scholars to the continent, where in Europe there was increased need for faster output and intense bureaucratic documentation, and at what times the prestige and beautification of a text was prioritised over functionality and speed of production. Our exploration of books as material objects continued, offering new methods of dating and identifying the providence of a text or its scribe, with a new wealth of language to describe the scripts before us.