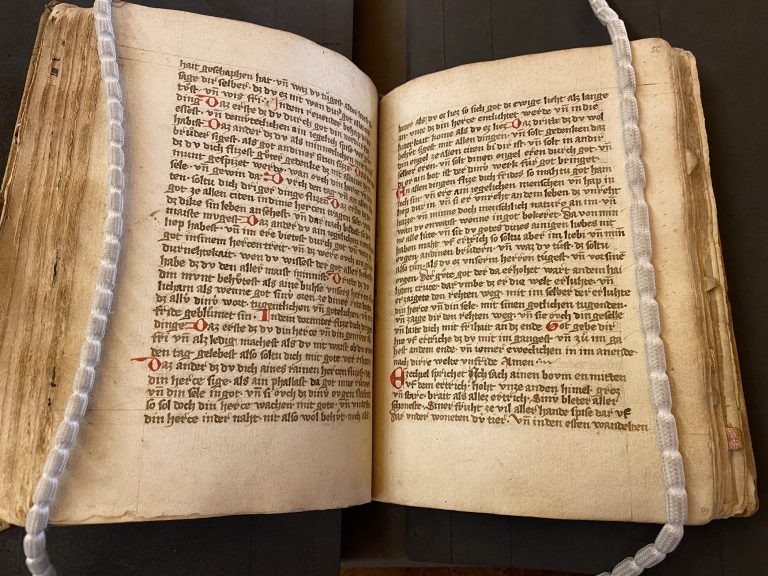 To be honest, I had nearly forgotten about Bodleian Library Ms. Germ. e. 5 in the 18 month since handing in, in March 2021, my MSt. in Modern Languages Method Option essay that focused on this particular 14th century manuscript.

I had spent more or less all of Hilary Term 2021 with that manuscript, as part of a group of brave Germanists working remotely on the, at that time newly digitized, manuscript (thanks to the Polonsky Foundation Digitization Project). We edited the manuscript and all worked on different aspects of it, like for example the materiality, the particular dialect used, the binding – or in my case, conducting a palaeographic analysis. All of that without ever seeing the manuscript in person (thanks again, Covid!). It is fair to say that after weeks and weeks of hard work, a couple of sleepless nights and a few crises, all of us were rather happy to finally let MS. Germ. e. 5 go…(special shoutout to C, J, M, M and S at this point! Who would have thought one of us would ever see this mysterious manuscript?).

So, can you really blame me for not thinking about it too often? In fact, I can count the number of times that happened since handing in the essay on exactly one hand: The first time was the launch of my project group’s partial digital edition of MS. Germ. e. 5 as part of the Method Option launch series that ran throughout Trinity Term 2021.

The second time was talking about my palaeographic analysis of the manuscript at the finale of said series, the ‘Digital Editions Live – Methodology Workshop’. The third time was for my blogpost ‘Hands, ink and abbreviations‘ (the Part 1 of this blogpost in a way), summarizing my crazy experience of only working with the digitized images while trying to analyze specific features of the manuscript as a physical object.

The fourth time came rather unexpectedly in second week of Michaelmas Term 2022, also the second week of my DPhil project at the University of Oxford. I was browsing the catalogue of Western manuscripts at the Bodleian Libraries and selected Oxford colleges, trying to identify manuscripts that could be relevant to my project, for which I am looking at personifications in Medieval German prayer books written in or for female convents. MS. Germ. e. 5 is a compound manuscript meant for a female religious community following the rules of St. Augustine. So in hindsight, I shouldn’t have been surprised to reencounter it during my search. When I saw the shelfmark in the catalogue, I couldn’t help myself, I had to request it! And therefore, the – for the time being – last time I thought about MS. Germ. e. 5 was our little intimate date in the Weston Library at the end of October 2022, where I saw it for the very first time in person after nearly two years of knowing about it.

I felt quite emotional when I first opened the specifically manufactured box protecting it, touching it for the first time, since it immediately brought me back to the beginning of 2021: The little leather strip dangling from the manuscript reminded me of our remote manuscript consultation session via Microsoft Teams with the incredibly helpful Andrew Honey, who was kind enough to function as our eyes and hands when we couldn’t see the manuscript in person and who answered all our questions regarding the materiality of the manuscript, so that we could successfully finish our Method option essays.

Opening the manuscript then brought me back to my palaeographic analysis of MS. Germ. e. 5. One of my proudest achievements was the conclusion that the manuscript had been written by four different hands, not three as the catalogue entry stated: Hand 1 wrote the majority of the manuscript, fols. 1r-7r and 9r-99r. Folios 7r-8r are written in hand 2. Fol. 99v is attributed to hand 1 in the catalogue entry to this manuscript, there are however some telling differences to hand 1, therefore I concluded that fol. 99v was written by an additional hand, hand 3. A final, significantly different since more cursive hand, hand 4, can be identified for folios 100v-104v.

Identifying the additional third hand was definitely facilitated by working with the digitized images, allowing zooming into the manuscript and side-by-side view of different folios. This feeling was confirmed during my in-person meeting with MS. Germ. e. 5: When I first looked at fol. 99v and then turned the page to fol. 98v, I simply couldn’t see any difference! And for a split second I feared that I had come to a completely false conclusion, that me being so proud of this piece of research was absolutely unjustified. But after moving closer to the manuscript and carefully examining these two pages for a little while longer I felt reassured: Those two pages were written by two different hands! It is just not as easy comparing the different telling letters that distinguish the two hands if you don’t have both pages side-by-side, having to turn the page every few seconds. So, in this particular instance, working with the digitized images really helped me.

But there are just some things you simply don’t see in the digitized images, like for example the little thread-bookmark which I found in between fols. 9v and 10r. While the small glued-in paper-bookmarks are visible in the digitized images, none of us had seen this particular bookmark (if you squint, you can see something, that might be the bookmark, in some of the images), once again proofing that nothing beats consulting a manuscript in person.

While skimming through the manuscript I also fondly remembered the time when we as a group were transcribing the parts of the manuscript allocated to us, brainstorming about abbreviations and transcription conventions in our Teams Chat while we were all stuck at home.  I immediately searched for my part: Fol. 58r to fol. 60v;  three folios, recto and verso, 30 lines each, of Der Minnebaum (‘The tree of love’). This is a German translation of the Latin tract Arbor Amoris, which is attributed to Pseudo-Bonaventura. It is a tree allegory of the devoted soul’s mystical ascent to heaven and to God. And when I found fol. 58r and read the words “worten · ald mit werken”, I chuckled.

Those were the first words I ever transcribed from a medieval manuscript and, if I remember correctly, it took me a solid five minutes to do so at the time. Now, I was able to more or less fluently read the whole page in well under two minutes, because the weeks it took me to transcribe my part of this text in early 2021 really sharpened my palaeographical skills.

In a way, it is because of these four words, “worten · ald mit werken”, that I was able to correctly transcribe over 30 folios from a different German prayer book within three days for my second Master thesis (which I wrote over the summer); that I can now simply read from a manuscript. And because I understand that more clearly after consulting the manuscript in person, it won’t take months for me to think about MS. Germ. e. 5 again. It will now happen every single time I transcribe a text from a medieval manuscript.

MS. Germ. e. 5 in A catalogue of Western manuscripts at the Bodleian Libraries and selected Oxford colleges (Accessed 28.10.2022).

Pictures highlighted with ‘*‘ were taken by the author.