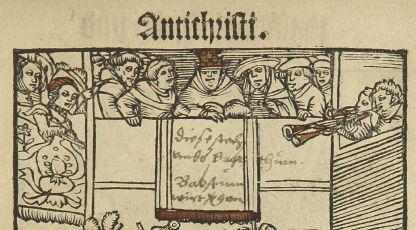 Some remarks on the reception of the Antithesis figurata vitae Christi et Antichristi and the Passional Christi und Antichristi. Revised version of the address given by Ulrich Bubenheimer during the launch of the new edition

An effective method for researching the reception of a 16th-century edition is the so-called Exemplarforschung, i.e. recording as many surviving copies as possible and evaluating their traces of use – marginalia, highlighting, drawings, etc.

So far, I have examined 8 copies of the Antithesis and 27 copies of the Passional (9 of the Passional printed in Wittenberg, 11 Erfurt and 6 Strasbourg). Of these 35 copies in total, 17 contain old traces of use. I was surprised that none of the copies showed traces of a supporter of the Roman Catholic Party. For this paper, I select only a few of the insights gained: purchase price of the copies and some aspects of the significance of colouring-ins and annotations.

The purchase prices are recorded in three copies. Publications with woodcuts were usually more expensive than those without images. The original version of the Passional had 3 and a half sheet with 14 folios. An unillustrated pamphlet by Andreas Karlstadt with the same number of leaves, printed in Wittenberg in the summer of 1521,[1] was sold for 4 pfennig,[2] one third of a groschen at 12 pfennig[3]. On the title page of a copy of the Passional printed in Wittenberg[4], a contemporary hand noted the purchase price: 1 gr[oschen]. Another customer in Austria paid 3 kreuzer for the Antithesis,[5] which is roughly equivalent to 1 groschen. But to a third buyer, a monk called Father Johannes Lechperger, the Wittenberg Passional was sent for 24 pfennig,[6] that is, for 2 groschen. We see from these examples that there were not fixed retail prices – and postage and package might have played their role as well.

But how much was one groschen worth in those days? That can only be estimated approximately due to the lack of conversion tables. Approximately 1 groschen per day was estimated for the food of an artisan working for pay. His daily wage without food was about 2 groschen.[7] So, to buy the Passional, the wage worker had to work half a day to a whole day.

2. Colouring-in and comments by the readers

Some buyers of the booklet had the woodcuts coloured-in professionally – as in two copies of the Antithesis[8] -, others coloured in the images partially with only one colour or simply the ink. The colouring often contains interpretations of the images. At the suggestion of Bo Adams, my involvement with the Passional began with the Pitts Theology Library copy in Atlanta, an Erfurt edition[9]. An anonymous reader coloured in with brown wash or his grey ink only selected elements of the images, preferably headdresses and objects through which he could identify actors in the scenes depicted.

The woodcut on fol. B2r shows the pope pursuing his pleasures at a jousting tournament with musicians and women instead of turning his attention to the sick and disabled, as Christ is doing in the opposite image. The anonymous commentator gives the scene of the pope a new meaning. He sees it as a fight against the papacy: Diese stechen umbs Bapsthum. Babstum wirt vergan. (These are fighting for the Papacy. The Papacy shall pass away.) Then the Anonymus himself enters the scene and cheers on the fighters: Stecht lieben Hern stecht/ vnd das Bapsthum zur brecht. (Fight on, dear Lords, fight, and break the Papacy.)[10]

The notes of the Anonymus show overall that in his reading he was primarily interested in attacking the Pope, which he exacerbated by his partly obscene vocabulary. The authors of the Antithesis or the Passional also evidently pursued the goal of shaking both reverence and obedience towards the pope out of their readers through the satirical portrayal of the pope as the antagonist of Christ and through the antithesis of biblical and papal law. In the copies reviewed, most readers who left notes or doodles in their copy show themselves to be primarily interested in the texts and images directed against the Pope. The change of the original title from Antithesis to Passional could perhaps suggest that the images of Christ could also be used in the traditional understanding of the word Passionale for the meditation of Christ’s suffering. However, a meditative use of the pamphlet was difficult, since viewers had the polemic against the Pope in front of their eyes next to each scene of Christ. Nevertheless, two copies have been found which prove that their users concentrated on the Christ scenes without showing any interest in the Pope scenes.

The user of an Wittenberg copy of the Antithesis[11] only verbalised in brief words the theme of the respective depiction of Christ, e.g.: Corona spinosa (Crown of thorns); Christus lavat pedes (Christ washes the feet); Christus est servus (Christ is servant); Christus bajulavit crucem (Christ carried the cross)[12]. Similarly, this can still be seen today in Passion images on so-called Ways of the Cross, which combine Passion meditation with elements of pilgrimage. However, central stations of the Passion are missing in the Passional Christi und Antichristi, e.g. Jesus before Pilate or the Crucifixion of Christ.

One owner of the Erfurt Passional also expected a depiction of the Betrayal of Judas, and since he missed this scene, he identified one of the soldiers accompanying the Carrying of the Cross with Judas: Ei das ist doch – Judas ist das (Look – Judas is that).[13] In his simple approach, this reader wrote above Jesus’ head in the scene where Christ is preaching to the people: Jesus ist das (Jesus is that). (B3v) The notes of this reader, who also scribbled a writing exercise in his copy (C1r) show that the Passional could also find the interest of little educated laypeople, immersing themselves in the images of Jesus, while the images of the Pope and the texts on canon law remained foreign to them without the corresponding background knowledge. The reader could have been a devout Protestant, marked by a simple biblical piety that was no longer interested in polemical disputes. I would rather date the manuscript of this glossator to the 17th century.

[2] Purchase price on the titlepage of the copy in Herzogin Anna Amalia Bibliothek Weimar: 4° IX, 137 br.

[10] I owe the translation of the German notes to Armin Siedlecki of the Pitts Theology Library.