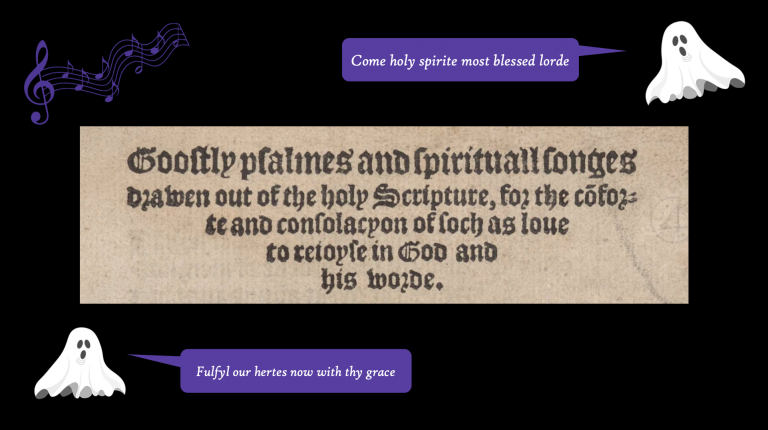 ‘Goostly psalmes and spirituall songes: a digital edition’ is available to read now on the Taylor Editions website.

I was quite at a loss when, towards the end of our first week on the History of the Book and Digital Humanities project, we were directed by our graduate mentors – Mary Newman and Sebastian Dows-Miller – to peruse the Sammelband (Queen’s College Sel.d.81) on which our project would be based and select which of the nine texts bound within it we would prefer to focus on for the succeeding weeks. Overwhelmed, intimidated, but also excited – I was spoiled for choice by the marvellous miscellany of pamphlets. Each varies considerably in length, language, and content. Having spent that first week, however, transcribing and encoding the first folio (recto and verso) of Goostly psalmes and spirituall songes, so as to get to grips with TEI, I had unwittingly developed a special sympathy for this text. Perhaps because of my love for music. Perhaps because Hallowe’en is my second favourite holiday of the calendar year (although the ‘goostly’ nature of this pamphlet is more akin to the Holy Ghost than one that might haunt you). There is no one reason. I was quite simply drawn to it, like so many before me, as is evident from the crack along the spine which opens at Goostly psalmes. Thus, come Monday morning of week two, I had resolved that I wished to continue my work on this text.

Now I knew which text I was going to work with, I thought it prudent to become better acquainted, seeing as we would be spending so much time with each other. A single glimpse at the sammelband reveals some of its story; it’s evidently quite an old text, even with its relatively recent rebinding, replaced sometime during the early twentieth century. Yet only further research would impart the extraordinary history of the pamphlet. This book contains the sole extant complete copy of Goostly psalmes – most likely owing to its inclusion on the list of prohibited books in September 1546. The Lutheran theology presented in the text was tantamount to a one-way ticket into the flames that burned at St Paul’s Cross, and consequently engulfed most other copies.

Had this pamphlet not been preserved, it’s supposed status as the first printed English hymnbook would be compromised. Preceded by a short poem and some prose about the pamphlet, Goostly psalmes contains just over forty hymns. Many of the hymns included were translated from German by Myles Coverdale.

As a student at the University of Exeter (about to enter the fourth and final year of my undergraduate degree) I was thrilled to discover that Coverdale was, for a brief period between 1551 and 1553, Bishop of Exeter. Exeter Cathedral happens to be the seat of the Bishop of Exeter – a place that I have visited just once, although is visible throughout the city as a prevailing figure in the skyline. It is home to a few treasures too: the Great East Window is a splendour of stained-glass; the ornate Bishop’s Throne, made in the early fourteenth century from local Devon oak, is the largest in England; the ceiling is the longest continual medieval stone vault in the world. It’s natural then, that a stained-glass portrait of Coverdale might be eclipsed. If you turn around (turn around, bright eyes), however, upon entering the cathedral and direct your gaze upwards, you will find a dashing Coverdale looking right back down at you. This link between the author of Goostly psalmes and Exeter was compelling for me.

So now, more au fait with Coverdale and his Goostly psalmes, it was time to consider just how exactly I would orchestrate the metamorphosis of this physical object to a digital edition. As explained in our introduction to transcribing and encoding, it was key first to determine my transcription principles. These editorial choices regarding audience and function would influence how I chose to represent the text. Initially, I wanted to produce a hyper-diplomatic transcription. This meant including all special characters (long s, r rotunda, etc.), diacritical marks, and original orthography – essentially, I aimed to make my digital edition reflect the physical pamphlet as closely as possible.

About a third of the way into my transcription, however, my approach underwent a slight shift. I had the epiphany that all this detail was probably not necessary for my intended audience (musicologists, as opposed to linguists) and was costing me valuable time. I changed tack accordingly. Diacritics were henceforth dispensed with, abbreviations were expanded, and spellings was normalised (to an extent – i.e. I changed ‘u’s and ‘v’s, and ‘i’s and ‘j’s where appropriate). Now the biggest obstacle that remained was the occasional palaeographic problem; I was not much versed in sixteenth century gothic type. I generally managed to overcome this, though, by considering the context surrounding the words I struggled to read.

With a complete transcription, the next step was to encode it. Equipped with an arsenal of TEI elements and attributes from our first week, I embarked upon this enterprise with enthusiasm. I began by pasting my transcription into Oxygen XML Editor and adding basic features, such as page breaks, titles, and a skeletal TEI header. Working in layers like this meant that I was able to add more complexity at even stages throughout. I was, however, slightly disconcerted when, even after having included elements such as forme works, line groups, and lines, that I maintained over two thousand validation errors. Torn between shame and pride, I decided to ignore the red lights and continue encoding regardless.

As a modern language student, I could distinguish parallels between learning TEI and a foreign language. In order to resolve the various quandaries that I had about representing my text, I learned innumerable new TEI elements and attributes (via the help of Mary, Seb, and the Internet), much like how we can acquire new vocabulary to expand and enhance our capacity for expression in any given language.

One element I spent a lot of time inputting into my xml document was <note>. This tag I employed to mark marginalia, most of which in this pamphlet is comprised of references to biblical scripture. There is lots of it. And I did not anticipate it to be as big of a challenge as it was. The sheer volume of references in the margins was a contributing factor. Formatting them all in my TEI header was an incredibly laborious task; I chose to organise them all by book, chapter, and verse. Nevertheless, this did clearly illuminate to me which texts were most frequently cited – you would be correct to suppose that it is indeed Psalms! Regrettably, I put off this task for quite some time, in the same fashion that I often leave academic referencing and compiling bibliographies until after I have written my essays. I should know by now that this is not the preferable course of action, I should have learned my lesson, I shouldn’t leave it all to the end. But I did, and I was pleased once I had done it all.

I honestly struggle to articulate the sense of delight I derived at having (pretty much) completed my encoding, as it did not last all that long once I remembered that I had still yet to face the colossal task of representing musical notation. What on earth was I going to do about the hymns?! It was a veritable mind-boggler. My research about encoding musical notation first led to the proposal of trying somehow to incorporate MEI (Music Encoding Initiative) with TEI. This, I soon discovered, was beyond my capacities and the time constraints of the project. My second idea was to use MuseScore as a means of representing the notation, and then adding images of this notation to my xml document with the <figure> element. Sebastian then suggested that I use <notatedMusic> instead, which better integrates the images, as within it I could use <graphic> to link my images, and <seg> to include the lyrics. Within the <seg> elements, I included the attribute rend=“hide”, as I wanted to include the lyrics of each first verse in the xml, despite the fact that I added them in MuseScore too, to make them searchable by R – a possible use for the skills we learned in the data science course. This was not something that the Taylor Editions website was necessarily ready to implement, so I thank Emma Huber for making this feature possible. As for the notation itself, it was merely a matter of translating from mensural to modern. Halving note lengths and removing bar lines enabled me to reflect the way in which the music is represented in Goostly psalmes.

Although our internship is now finished, I will continue to create the musical notation for the hymns to add to my edition. Retrospectively, I was perhaps a little ambitious to expect to be able to complete all 41 hymns in the given time. Nonetheless, I am very proud of what I have achieved during this internship and I am thankful to everyone involved in the UNIQ+ programme who has helped along the way. It really is wonderful to see the product of this hard work up on the Taylor Editions website. The skills that I have learned have enlightened me to the endless opportunities that exist within the digital humanities and will serve me well in the future. Having tackled encoding a variety of objects from a vaccination card, deletion poetry, the most hideous paste down jam-packed with Latin marginalia that very nearly led me to delete Oxygen XML Editor from my laptop, and, of course, Goostly psalmes, I find myself wondering what exactly I might like to try next. Whatever (whenever, wherever) it is, I am grateful for being able to participate in this internship, without which I may never have experienced the pleasure of impersonating a STEM student as I sat for hours staring at code on my laptop.

Freya Mugford is one of this year’s UNIQ+ interns with the History of The Book. She studies English and French at the University of Exeter.